“Maid of the Loch”: first contract in historic rebuild signed

the “Maid of the Loch”

The first contract to be let in the £5.5 million project to rebuild the Maid of the Loch, Loch Lomond’s Paddle Steamer, was signed on Monday 22 February 2016. The contract has been awarded to OSD-IMT Ltd., of Dundee, and is for marine consultancy services. OSD will provide the necessary naval architecture, engineering, structure, and outfitting expertise to produce all the required calculations, drawings, and designs to ensure that the rebuild meets all regulatory requirements.

John Beveridge, Founder of the Loch Lomond Steamship Company, the charity that owns the Maid, said “This is a landmark event for us. It is almost exactly 20 years since the charity took ownership of the Maid, and we are now able to start work on returning this unique ship back into steam operating condition. It is hugely exciting for everyone and our thanks for all the wonderful support we have had. This is a major investment for Loch Lomond”.

Managing Direct of OSD-IMT Ltd., Neil Patterson, said “We are pleased to be able to support the Loch Lomond Steamship Company with this exciting and challenging project, and look forward to assisting them in returning Maid of the Loch to operation”.

Maid of the Loch is the last paddle steamer built in Britain, in 1953, and she sailed on the loch until 1981, carrying such notable people such as Queen Elizabeth II (on two occasions) and Queen Salote of Tonga. She lay neglected and deteriorating at Balloch until rescued by the charity in 1996. Since 2001 the Maid has been a 2 star visitor attraction in VisitScotland’s quality assurance scheme and open to the public every day in summer, drawing around 15, 000 visitor each year.

Dr Mike Cantlay, Chairman of VisitScotland, said “I am absolutely delighted that the project to rebuild the historic ‘Maid of the Loch’ can now go full steam ahead; it is fantastic news for tourism in the region. As the last paddle steamer built in Britain, as well as the last in a long line of Loch Lomond steamers, the ship is an important part of Scotland’s maritime heritage. She already draws a significant number of visitors every year but the refurbishment works to restore her to her former, full glory as an operational paddle steamer will mean that she’ll become a superb, first-class attraction, offering a greatly enhanced quality of visitor experience. During this Year of Innovation, Architecture and Design 2016, we are highlighting and celebrating examples of Scotland’s rich engineering legacy as well as icons of innovation across many fields. The ‘Maid of the Loch’ is certainly one of those so I am very much looking forward to seeing the completion of this exciting restoration project.”

Last year Maid of the Loch was awarded a Stage 1 pass by the Heritage Lottery Fund, worth £230, 400, which allows this professional work to be carried out. HLF have promised a further £3.8 million if the charity can raise the balance of £1.7 million.

“Of course, the Maid is not just an historic steamship”, added John Beveridge. “She represents jobs, training, added value for visitors, and will be an icon for Loch Lomond. A refurbished Maid of the Loch will embrace 21st century safety and comfort, with 20th century Scottish engineering, using 19th century technology. How brilliant will that be?” 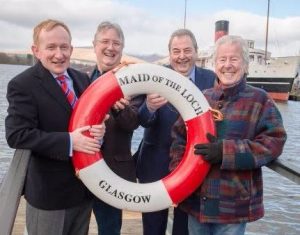 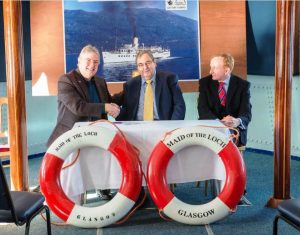 About the “Maid of the Loch” etcetera…

1.Maid of the Loch is owned by the Loch Lomond Steamship Company, a charity registered in Scotland. All its Directors and volunteers give their time free; there is no staff. It has raised – and reinvested – over £1.9 million since 1996 for the ship and infrastructure

2.The Heritage Lottery Fund have supported LLSC’s plan to return the Maid of the Loch to steam operation in 2018 and have promised a further £3.8 million if the charity can raise the other £1.7 million in the £5.5 million project

3.The Maid is moored at Balloch Pier on Loch Lomond as a static visitor attraction and will open to the public again at Easter. Full details on the charity’s website www.maidoftheloch.org

5.Dr Mike Cantlay has been Chairman of VisitScotland, Scotland’s national tourism organisation, since 2010. He was awarded an OBE for services to tourism in 2014. He lives in Callander. www.visitscotland.org

All Eyes on Ras Al Khaimah…