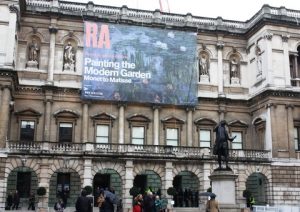 A new triumph for the Royal Academy.

Several weeks into the enchanting exhibition Painting the Modern Garden: Monet to Matisse at the Royal Academy of Arts, this is already one of the great London gallery’s most popular shows. The crowds are as thick on the ground – albeit subject to careful control by the RA ticket office – as were the irises and lilies in Monet’s garden at Giverny, 80 km outside Paris.

So extensive are the bookings that the show will be open beyond the usual hours over selected weekends. The premises will stay open until 10pm on March 19 and 20,  March 26 and 27, and April 16 and 17. Some of the associated talks and events have meanwhile quickly sold out.

Ignore as best you can the crush: walking around the galleries, delighting in garden after garden as depicted by many of the greatest painters of the epoch, is a most refreshing experience. Visitors lose the sense of time as they immerse themselves in lush gardens of beautiful and often brilliant hues.

One begins to understand the enthusiasm of the anarchist writer Octave Mirbeau (1848-1917), for whom his garden in the valley of the River Seine was a utopia, and who wrote to Monet: “I love compost like one loves a woman.”

Wars and revolutions raged as Claude Monet (1840-1926) and his contemporaries wheeled their easels deep into their private gardens and under the shade of a tree mixed glorious colours from their palettes. Many became fanatical gardeners, to the extent that the human figure and their dwellings become minor details in the canvases.

More than 120 works take us into gardens in France, Germany, Denmark, Spain and the UK; from the early 1860s to the 1920s, for all over Europe and beyond artists were looking afresh at retreats, formal and wild estates where flowers, fruit and vegetables displayed their lushness. In masterpiece after masterpiece, the dual devotion of artist to painting and to cultivating the land shines through. In many, the paint looks as fresh as though it were applied this very morning. Be they peonies or poppies that bloom, all are treated lovingly.

The association of gardens with femininity is a popular theme, although for all that, this venture has little to say of female artists, although the Impressionist Berthe Morisot (1841-1895) is clearly recognised in this context.

The blossoming of interest in domestic gardens surely has many of its roots in the 19th century beginnings of modern trade and shipping, as long-distance voyages became swifter and safer,   more ‘exotic’ species were brought back from afar, and personal travel gave access to new vistas and plant varieties. Monet took an interest in what was new and unusual: botanists named a purple-violet variety of iris Madame Monet, after his wife.

Artists took inspiration from what was going on in their profession in other lands, with Monet admiring arched bridges that stand out in magnificent Japanese woodblock prints, a selection of which are shown in the exhibition.

Thus, the modern garden was formed by international trade and exchange alongside developing botanical technology, artistic creativity and practicalities of location. For many artists, their indulgence was total worship of their private plot.

Renoir resided in Montmartre, famous for its bohemian cabarets, but his gaze was often turned to his backyard, for the area at that time was dotted with small gardens, one of them behind his studio. Renoir has left us among other works in this genre the memorable Monet Painting in His Garden at Argenteuil.

Most visitors are awestruck – just as well there is a seating arrangement at this point to rest the legs and the senses – by the central room of the exhibition which is reserved for famed examples of Monet’s oeuvre, and we see why he once said he owed his painting “to flowers.”

Before and after this haven of supreme craftsmanship, we are dazzled by examples from Cézanne, Pissarro (who painted gardens while on holiday at the home of a friend), Manet, Sargent, Kandinsky (Murnau The Garden II), Van Gogh, Matisse, Klimt, Klee, Munch, Liebermann, Sorolla and Nolde. The flowers theme was ideal for various schools of art, allowing free brushstrokes and impromptu arrangement of subject matter.

The exhibition is brought down to earth – the soil – with 19th century gardening and botanical textbooks with their exquisite illustrations, some detailing the extensive hybridisation of dahlias. One book is open at a page to present a showy new cactus variety of dahlia.

Reinforcing the horticultural theme, there are even two groups of pot plants in one room.

It is Monet who leaves the lasting impression. We have his monumental Agapanthus Triptych, from the Musée de l’Orangerie in Paris reunited specifically for the exhibition and his last more sombre works of weeping willows when the death of his wife Alice and the slaughter of the Battle of the Somme weighed heavily on his mind.

The Royal Academy’s Ann Dumas and her curatorial colleagues have tastefully assembled from far and wide an unrivalled panorama that is the perfect antidote to the frequent gloomy days of London as the capital attempts a sluggish sortie into Spring.

The exhibition, organised by the Royal Academy of Arts and the Cleveland Museum of Art, is open until April 20 2016.

@ 388 the BDI results in bankruptcies and opportunities…