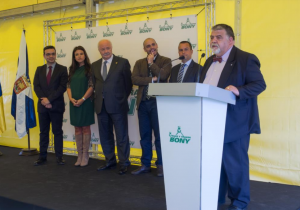 Capt. Antonio M. Padrón during the presentation of GRUAS BONY

Capt. Antonio M. Padrón y Santiago, “IMO Maritime Ambassador” and Maritime Authority of Tenerife attended the presentation of the new unit of GRUAS BONY to be dedicated to naval repairs

This unit corresponds to the Liebherr crane model 1600/2 with six hundred tons of load capacity and a range of 187 meters, which set it as the largest mobile crane in the province of Santa Cruz de Tenerife.

The considered a “smart crane” tells to the operator what of its multiple configurations and operating mode can take as the most appropriate for the work to be performed at any time.

The new machinery will give new impetus to the Off Shore business on the island, providing a new and necessary service that had not been offered in Tenerife until now.