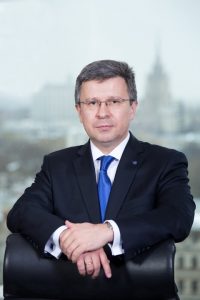 Marine Money, an international ship financing publication, has awarded PAO Sovcomflot (SCF Group) two of its annual industry awards for 2015: Nikolay Kolesnikov, Executive Vice President & CFO of Sovcomflot, has been recognised as the ‘Dealmaker of the Year 2015’, while the long-term credit facility agreement between Sovcomflot and Sberbank CIB has been named ‘The Project Financing Deal of the Year 2015 – West’.

SCF Group is honoured to be the recipient of prestigious Marine Money awards for the sixth consecutive year. The publication has acknowledged Mr Kolesnikov and his team for their success in raising funds for Sovcomflot projects despite challenges presented, both by global economic turbulence and the international shipping industry downturn. Since December 2014,  Sovcomflot was able to raise USD 1.2 billion in long-term debt finance.

Marine Money also noted that Sovcomflot remained one of the few big tanker companies to honour all of its financing obligations throughout the industry down cycle. The world’s leading credit rating agencies (S+P, Fitch, and Moody’s) have also either affirmed or raised SCF Group’s ratings in 2015.

According to the publication, “Nikolay Kolesnikov at Sovcomflot remained steadfast in his efforts, accessible, transparent, and committed to building noteworthy value at Sovcomflot, while maintaining important relations with the Group’s important banks, despite the seething market and political discontent.”

Marine Money further notes that by awarding Mr. Kolesnikov, it celebrates the dedicated hard work, tireless maintenance of relations with the core group of lenders, and a commitment to the best quality standards within international shipping — the collaboration on a global scale between people and companies to further trade and global prosperity.

Marine Money has also recognised the 14-year USD 340 million credit facility agreement between Sovcomflot and Sberbank CIB as ‘The Project Financing Deal of the Year 2015 – West’. This agreement was signed in December 2015, in order to finance the construction of three ice breaking crude oil shuttle tankers for Novy Port project (one of the largest onshore oil and gas condensate deposits on the Yamal peninsula in Russia), operated by Gazprom Group.

As noted by Marine Money, this transaction marked the first structured ship financing agreement undertaken by a Russian bank. The publication believes it to be: “a truly unique transaction, as it opens up the Russian commercial bank universe as a potential new market for commercial shipping finance business.”

SCF Group of companies (SCF) is one of the world’s leading shipping companies, specialising in the transportation of crude oil, petroleum products, and liquefied gas. The Group’s fleet includes 140 vessels with a total deadweight of over 12.2 million tonnes. The company is registered in St. Petersburg with offices in Moscow, Novorossiysk, Murmansk, Vladivostok, Yuzhno-Sakhalinsk, London, Limassol, Singapore, and Dubai.

The Group offers a wide range of vessels in the market segments most demanded by major Russian oil and gas companies. With its own technical development and unique approach to advanced technologies, Sovcomflot has the ability to meet the most demanding customer requirements, providing effective transportation for oil & gas companies. www.scf-group.ru