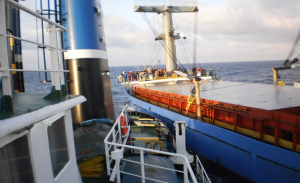 From the Ocean Glory operation

Herebelow viewers can read the latest news from the Tsavliris Salvage Group, including  the three Tsavliris Brothers’  award, in recognition of their unique and extensive contribution to Shipping and Greece and for their overall outstanding service to the maritime industry:

On 13 January the S/T “MEGAS ALEXANDROS” arrived at casualty’s position, established towage connection and towed the casualty towards Greece. 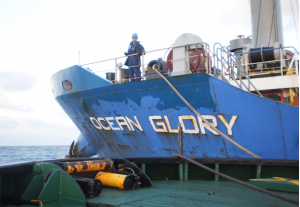 The convoy arrived safely at Piraeus roads on 15 January and the tow was delivered to port tugs.

On 16 February, the “Resolve Earl” arrived at casualty’s position and towage to Matanzas Cuba commenced.

On 17 February the convoy safely arrived at Matanzas (outside of Cuban territorial waters) and the tow was delivered to port tugs.

The “Resolve Earl” was released and arrived at Freeport on 18 February.

Later on that day, the vessel refloated by own means, whereupon the tug was instructed to return to Buenos Aires. 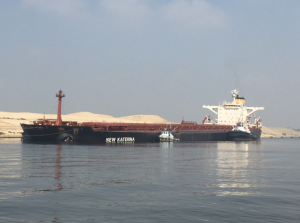 Another pic of the New Katerina

The “2016 Capital Link Greek Shipping Leadership Award” was awarded to the three Tsavliris Brothers of Tsavliris Salvage Group, in recognition of their unique and extensive contribution to Shipping and Greece and for their overall outstanding service to the maritime industry. The Capital Link’s 7th Annual Greek Shipping Forum was held on 16 February 2016 in Athens.

The Tsavliris Brothers were the fourth recipients to be awarded this most prestigious award. Previous recipients were Captain Panagiotis Tsakos, Pericles Panagopoulos and Lambros Varnavides (Baltic Exchange, RBS).

The Capital Link Forum was extremely well attended with over 1, 200 delegates. Not only was the number of attendees impressive but also the significant number of principals and senior people of the shipping and financial industry from Greece and abroad.

Capital Link’s President, Mr. Nicolas Bornozis presented the Tsavliris Salvage Group as a successful, traditional, third generation shipowning and maritime services company. He referred to the Tsavliris Group founder, Alexander G. Tsavliris, and his achievements. He mentioned that “His legacy has been honoured and expanded on by his three sons Nicolas, George and Andreas Tsavliris whom we honour today”.

Mr Nicky A. Pappadakis, Chairman Emeritus, Intercargo and A.G. Pappadakis & Co., announced the award and praised the Tsavliris Brothers for their hard work, integrity and business ethics. He highlighted the importance of the great relationship and teamwork between Nicolas, George and Andreas Tsavliris. He also noted the historical ties between his family and the Tsavliris family going back to their respective founding fathers.

The Tsavliris Brothers said that “We believe that the success of our company is due to the high quality of our services which are appreciated by our clients. This award will only encourage us to maintain the same high standards and continue to improve wherever possible”.