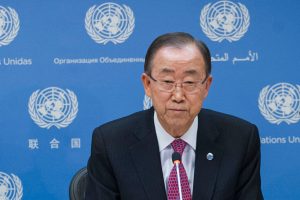 28 March 2016 – United Nations Secretary-General Ban Ki-moon has strongly condemned the suicide bombing that targeted a park in Pakistan on Sunday, killing at least 60 people and wounding over 100, including many women and children.

In a statement issued by his spokesman, Mr. Ban called for the perpetrators of this appalling terrorist act, which took place at Gulshan-e-Iqbal Park in Lahore, to be brought swiftly to justice, consistent with human rights obligations.

The UN chief urged the Government to do its utmost to put in place protective measures to ensure the personal security of all individuals, including religious minority communities living in the country.

Mr. Ban extended his heartfelt condolences to the victims and their families, and expressed his solidarity with the people and Government of Pakistan.