Greek Ports look south and east through the Suez Canal 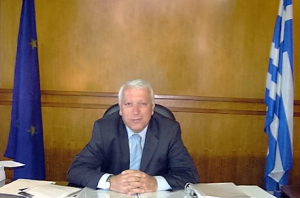 According to the International Chamber of Shipping almost the 90% of the world trade is carried with nearly 50.000 merchant ships. The European Commission says that 74% of goods imported and exported and 37% of exchanges within the Union transit through seaports.

The Suez Canal is a very important waterway linking Mediterranean with the  East. In 2014 one tenth of the seaborne trade was carried through the Canal (H.S.N. 2016).In 2015 more than 17.000 vessels and 5.491 containerships crossed it. The numbers are expected to increase with the recently finished $8, 4 billion project of deepening and excavating a new 35km parallel channel, which brings the capacity of the waterway to almost 100 ships a day. During the second week of March 2016 341 ships crossed the Canal with a total load of 19 million t.

China, the world’s main energy driver over the last decade, has its  20% of total foreign trade volume with countries along the Maritime Silk Road (M.S.R.). Chinese companies have directly invested to those countries almost $10 billion. New Silk Road Fund has a capital of $40 billion to fund major infrastructure projects in the region. The M.S.R. passes from the Suez Canal.

India, the emerging giant player in world trade, with an increase in oil products of 9% during 2015, is to initiate several major maritime projects looking westwards. Agreements with Egypt and Jordan on maritime transports have been recently signed. The Suez Canal is an important factor in many of these projects.

Indonesia is another player which starts looking westwards. The enormous Egyptian gas volumes recently discovered, Eastmed ultra deep gas and deep offshore Greek deposits all are next to the Suez Canal.

The Greek Prime Minister Alexis Tsipras was the first foreign leader to visit Iran. The recent removal of sanctions by the international community gives hopes to Greece to become a hub and getaway of Persian oil and gas. Iran and Saudi Arabia are building a large offshore and marine infrastructure including ports, logistic centers, shipyards (Buamim, comm.) The Suez Canal is to be used for these projects.

Greece, the top of the four dominant shipowing countries (Greece, Japan, China, Germany) throughout the past decade (www.maritimes.gr, Oct. 27, 2015), owns 16, 1% of the entire world fleet of seagoing ships (279 million deadweight tonnes). Many of those ships use the Suez Canal and Greek ports. The country has developed a huge port system, which includes more than 1.100 ports and port structures of various sizes, importance, degrees of completion. 93 of them serve passengers, 42 accommodate cruise ships, 16 are of international importance and 16 of national interest.

In the recent 3RD Mare Forum – Maritime Transportation of Energy Conference held in Athens on March 2, 2016, two of the questions asked by the organizers were: “Can and will Greece become an energy hub towards Europe during the next decade?” and “What can be the role of Greece in the triangle of Israel – Cyprus – Greece and Egypt…” The answer was that Greece can be a hub and take further advantage of the Silk Road Economic Belt and the 21st Maritime Silk Road initiative. In the geopolitical chess game Greece reaches all the way to India and China and some Greek ports are likely to emerge as key players in the global trade. Piraeus, the main port of Greece, reached in 2015 an annual throughput of almost 3, 7 Mteu which placed the port in the 6th position in Europe. In the period Jan. – Sept. 2015  the  five top European ports in container  throughput  were (Hellenic  Shipping News): Rotterdam  (9, 3Mteu, 12th  worldwide),  Antwerp (7, 3Mteu, 16th), Hambourg (6, 8Mteu, 19th), Bremerhaven  (4, 2 Mteu, 19th), Valencia (3, 6Mteu, 28th). In the first two months of 2016 Piraeus increased its throughput by 13, 2% compared to 2015.

The spectacular increase of Piraeus throughput in the last years is due to the management of Piers II and III by Cosco Pacific, the container terminal operator of  the giant in shipping of China, the faster growing fleet-owner country. These two Piers handled 3 Mteu in 2015 with an increase of 1, 6% from 2014 and paied 40M€ to the Piraeus Port Authority. Despite a 35% decline since July 2015 of the Maritime Silk Road Freight Index (H.S.N., March13, 2016) the slowdown of Chinese economy did not seem to influence Piraeus. Cosco Pacific handled in 2014 almost 20Mteu.

Greece, the principal global shipping player, is the closest mainland European country to the Suez Canal and a member state of EU and the Monetary Union. The country takes advantage from the waterway. Of course for the moment being oil and gas prices have made all fuels cheaper and are unlikely to rebound anytime soon. This makes numbers of ships to decide to take the Cape for northern Europe instead of the Suez route in order to avoid paying the very expensive fees for crossing the Canal. The average extra time for the Cape route to northern Europe is 10 to 12 days. Suez is not expected to loose its primordial importance.

Greece is increasingly looking to the south and to the east. The Suez Canal is an important factor.

“Get back to basics” says IMCA expert