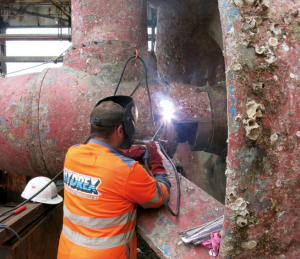 Last month a team of Hydrex diver/technicians performed underwater thruster operations on two vessels simultaneously in Coatzacoalcos, Mexico. Repairs were carried out on both azimuth thrusters of an FPSO, while the blade and shaft seals of the stern thruster of a 180-meter heavy load carrier were replaced.

The vessels are managed by the same company. We were asked to service both ships during one operation while they were berthed next to each other. This saved the time and cost of two separate mobilizations.

The stern thruster tunnel of the heavy load carrier was sealed off with our flexible mobdocks. All water was then emptied from the tunnel, creating a dry workspace around the thruster unit. The divers could then carry out repairs in drydocklike conditions. This is a necessity when opening up the unit for operations of this kind.

Next the team performed a full inspection of the unit. It was revealed that the four blade seals were leaking as was expected, but that the three shaft seals were also in need of replacement. This extended the scope of work. Our technical department had factored this in as a possibility. Therefore the OEM was asked in advance to be ready to mobilize. As a result one of their technicians was on location very fast.

In the meantime the diver/technicians had already replaced the four blade seals. When the representative of the OEM arrived on-site, the three shaft seals were also replaced.

A leakage test confirmed that all seals had been successfully replaced. The team then re-flooded the thruster tunnel and removed the flexible mobdocks. This concluded the operation on the heavy load carrier well within the available time frame.

Repair work on both azimuth thrusters of FPSO

The scope of work of the operation on the FPSO was a lot more complex.

Repair work was required on both azimuth thrusters of the vessel. The repair on the starboard thruster consisted only of the replacement of the oil distribution box. It had therefore been decided to perform this part of the operation underwater with a tailor-made cofferdam that was designed by our in-house R&D department. The parts of the cofferdam were made at a local workshop to our specifications and transported to the vessel. Our diver/technicians then assembled and welded the cofferdam on-site.

When ready for installation it was lowered into the water, positioned over the gearbox and secured. The water was then removed from the cofferdam. This allowed the team to safely remove the thruster casecap and gain access to the damaged oil distribution box, which they then replaced with the new one.

After the gearbox was fully reassembled, the cofferdam was removed. The divers then started the final part of the operation: removing the portside azimuth thruster to perform more comprehensive repair work on the unit.

Once the thruster was secured, the unit was detached from the vessel and carefully lifted out of the water. Because the vessel had been trimmed, the thruster was not positioned completely vertically. It was essential that it was handled very carefully while maintaining the same angle. Because of the size and weight of the unit this was not straightforward. Hydrex team members are trained to keep to the highest quality and safety standards in every situation. All required precautions were taken and they worked together with the vessel’s crew to ensure that the azimuth thruster was brought safely ashore.

The diver/technicians then carried out several repairs to the unit including the replacement of the blade seals, the liner, the bearings and the oil distribution box. These repairs were performed in cooperation with the superintendent of the vessel.

The thruster was then lifted from the shore and lowered into the water again. Finally it was repositioned and reattached by our team following the reversed procedure as during the removal. The vessel can now sail for another 18 months, when a full overhaul of the azimuth thrusters is scheduled.

Flexibility is an important element of every job we carry out, but in this case it was crucial that both repairs were adjusted to each other. Taking into account the scope of both jobs, this was not an easy feat. Our technical department has many years of experience in dealing with complex jobs, logistically and technically. They also have a large team of qualified divers at their disposal. These are trained to handle a wide variety of repairs and can adjust to changing circumstances.

The team worked in shifts throughout the entire operation. This allowed us to adapt the operation to the schedule of the vessels without losing the safety and quality standards that we impose on any job we perform.

10 year warranty on Ecolock for FSRU in China

Greek Ports look south and east through the Suez Canal