View from above; what an event that was!

Event attended by 600 helps support cause of Hellenic Hope

[April 8, 2016] Many leading participants in today’s shipping industry once again gathered to pay tribute to some of the greats of Greek shipping’s past at the Greek Shipping Hall of Fame Induction Ceremony & Dinner 2016.

Highlights of the gala dinner event included the announcement of the Inductees for 2015 – John C. Carras and Stavros Daifas – who were remembered through interviews with family and independent experts, and warmly lauded by the 600 guests at the Megaron, the Athens Concert Hall.

Annually the Inductees are voted for by the members of the Greek Shipping Hall of Fame Academy. The event also included spots to remember the 22 other current Inductees of the Hall of Fame, elected in past years. 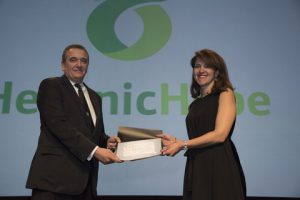 Irene Charalampopoulou accepting the donation from George D. Pateras, president of the HCS

A significant portion of the funds raised from the event was donated to Hellenic Hope, a charity that raises funds, primarily from overseas, to support carefully-selected projects in Greece that help children in need, focusing on children in socio-economically deprived areas and children at risk from the ongoing crisis in other ways.

“Thanks to your important contribution we have managed to change significantly the lives of more than 3, 500 children in need, ” said Irini Charalampopoulou, accepting the donation on behalf of Hellenic Hope. “This is a 66% increase on last year!

“We continue relentlessly to pursue our core projects: in nutrition and nursery teachers, in social workers and therapists, in scholarships and vocational guidance, in infrastructure projects on children’s health and safety, ” said Ms Charalampopoulou. 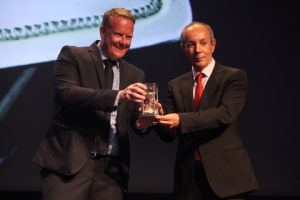 “With your cooperation we are translating hope into tangible results, and we are enabling our children to take their future in their own hands, ” she said. “Thank you, Greek Shipping Hall of Fame, thank you donors, thank you shipping community, for your strong support for our cause at Hellenic Hope.”

In addition to the Inductees, the ceremony honoured Cees van Noort, a retired official of the Port of Rotterdam and philhellene who has photographed thousands of Greek-owned ships in his lifetime. His full collection has been acquired by the Greek Shipping Hall of Fame.

Impressive industry support for the event was led by ABS, the Liberian Registry and Shanghai Waigaoqiao Shipbuilding Co. Ltd. as co-Lead Sponsors of the Induction Ceremony & Dinner 2016.

Vassilios Kroustallis, Regional Vice President ABS, said that all the Inductees in the Hall of Fame were distinguished by their vision, determination, acumen and ability to lead and inspire others. “Their achievements and legacy deserve to be recognised by our shipping community here and abroad, ” he told the audience.  “We welcome coming together with you once a year to acknowledge them and celebrate their achievements.”

According to Michalis Pantazopoulos, Senior Vice President of the Liberian Registry, Greek shipping continued to maintain its position as No.1 worldwide and to demonstrate its faith in the Liberian flag – a relationship dating from 1949 when Greek shipowner Stavros Niarchos registered the first foreign ship under the flag.

Pantazopoulos said: “The Liberian Registry has established Piraeus as its international training centre, bringing hundreds of Liberian Flag auditors every other year and training them, supporting also the Greek economy.”

“We sincerely wish a good future to the Greek Shipping Hall of Fame”.

TMS, which has become one of Greece’s largest shipping groups since it was established in 1986, sponsored the welcome drinks party for the event.