On 7-8 April, EFIP members gathered in Vukovar (Croatia) for their Executive Committee meeting, hosted by the Port Authority of Vukovar. Ports discussed a number of (political) issues that are currently on the Brussels agenda. The main important topics were: the new state aid rules (GBER) and the impact on inland ports, the good navigation status and the role of inland ports to improve navigability and the creation of a Digital Single Market for Inland Waterway transport. Ports serve as multi-modal hubs were other modes of transport join and they could therefore play a crucial role in the creation of a Digital Inland Waterway Area (DINA) and Digital Multimodal Nodes (DMN). During the meeting, it was also stressed how important it is to obtain reliable data, statistics on inland ports and inland waterways.

During the second part of the interactive open session entitled “unlocking the potential of the River Danube”, keynote speakers Jozo Radoš, Member of the European Parliament (Croatian, ALDE-Group), Petar Margić, Director-General of the Danube Commission and Zrinko Zvocak, Managing Director of the Croatian Agency for Inland Waterways reflected on the key challenges for the Danube and the role of inland ports.

Special attention was paid to the 137, 5 km long part of the Danube River in Croatia and the new Sava-Danube canal. The joining of the Sava and the Danube is a revival of an idea that goes back to the year 1737 according to MEP Mr. Rados (pictured on the left). The canal with a length of 61 kilometers is expected to create through irrigation an extra 30.000 hectares of agriculture land, new forestry and “is one of the most important projects of the Croatian Government for the years to come and will extend the TEN-T network to the Western Balkans”, said Mr. Rados. Mr. Rados also pointed out that “the Sava-Danube canal is not only good for agriculture, tourism and inland ports but also enhances the political cooperation with non-EU members like Bosnia-Herzegovina and Serbia.”

Mr. Margic underlined that the good navigable condition on the Danube is a pre-requisite. He highlighted the role of the Danube Commission and its responsibility to maintain the fairway. In addition, he stressed that there are three barriers for unlocking the full potential of the Danube: lack of investments (closing down of steel factories along the Danube); the many infrastructural bottlenecks (e.g. 56 only in Hungary) and the lack of political will as local authorities from each country are responsible for their own stretch of the river. According to Mr. Margic, the Danube-Saba canal will give a positive boost and will be good for irrigation and navigation as well.

Mr. Zvocak stated that there are currently no major infrastructure projects in Croatia as most of them were done in the 19th century.  He underlined the importance of the Sava-Danube channel project as it can provide an extra economic impulse to the area only when new ports on the channel are created.  A project of strategic importance as the region is facing the problem of young people leaving the country. In addition, the Regional Development Agency stated that the project would employ about 3000 people in the first place.

CEO of the Port Authority of Vukovar,  Božana Matos said: “This meeting confirmed to us that the coming period will be used to further promote the Danube-Saba channel project in a strategic way on an international, European and national level.”

Mr. Hans-Peter Hadorn, President of EFIP, underlined that “the Danube remains high on the priority list of EFIP and it will continue to support the Danube and its strategic links”. 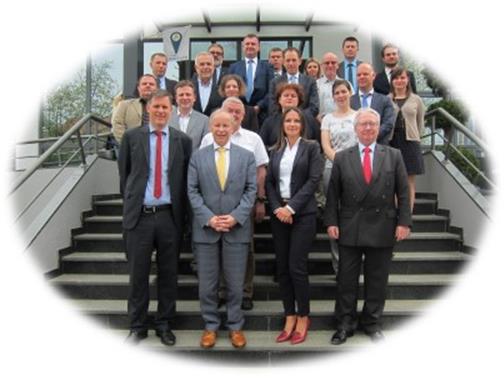 The European Federation of Inland Ports (EFIP) brings together more than 200 inland ports and port authorities in 19 countries of the European Union, Switzerland, Ukraine and Serbia. Since 1994,  EFIP has been the voice of the inland ports in Europe. EFIP highlights and promotes the role of inland ports.

EFIP actively follows all developments in the field of EU policy of importance to inland ports and represents the inland ports vis-à-vis the European institutions and other international bodies. EFIP offers its members the possibility to exchange information, expertise and best practices with colleagues in other countries. For more information, please contact info@inlandports.be.