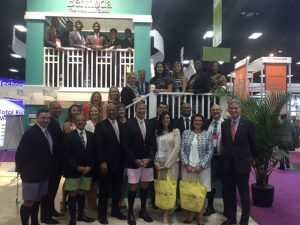 San Diego, California, April 13, 2016—The global re/insurance industry welcomed Bermuda Premier Michael Dunkley and a full delegation of government and industry representatives from the island during a tour of the Risk and Insurance Management Society (RIMS) annual conference and exhibition in San Diego yesterday.

“It has been heartening to witness Bermuda’s collaborative and robust presence at RIMS this year, as well as the warm reception our jurisdiction has received at this all-important industry event, ” said Premier Dunkley. “We have connected with key industry figures, conducted numerous media interviews, and promoted Bermuda very strongly as the top-tier, highly-respected jurisdiction it is. We felt that respect here in San Diego—from our partners around the world.” 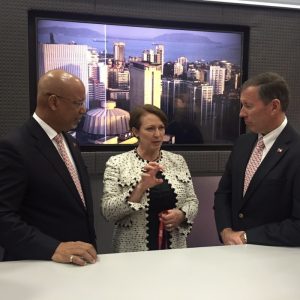 Among the prominent individuals the Premier and Finance Minister met with during their RIMS tour was Inga Beale, CEO of Lloyd’s of London. They were welcomed to the San Diego Conference Center by RIMS President Julie Pemberton and CEO Mary Roth, along with numerous industry executives, including some of the estimated 200 Bermuda-based professionals who travelled to RIMS this year.

“Bermuda continues to be the dominant jurisdiction at RIMS, ” said Richards. “Our commitment to the industry is evident by the large contingent that has come out here from Bermuda—and that commitment is the only way we are going to keep our dominant position as the centre for this industry.”

RIMS 2016 also served as a fitting platform to continue differentiating Bermuda from other jurisdictions amid an increased global focus on international financial centres.

“The 200-plus attendees from Bermuda sent a very compelling message to the world of risk management, ” said the BDA’s Webber. “This was an ideal time to show the strength of Bermuda’s collaborative insurance ecosystem. Our market’s acknowledged leadership position further differentiates Bermuda as a truly unique financial centre that adds value to the global economy, and the large G-20 countries, in particular. This is exactly why Bermuda needs to be regarded in a league of its own—as a domicile whose economic contribution is critical.”

BMA officials were among the large contingent of Bermuda industry experts spending time at the BDA Booth, where “speed-networking” sessions were held to connect business prospects with a team of Bermuda regulators, auditors, bankers and brokers.

“We’ve received a lot of positive feedback in respect to Bermuda having achieved Solvency II equivalency with Europe, ” said BMA Director of Licensing and Authorisation Shelby Weldon. “Many of the media questions focused on Solvency II, and we’ve been able to promote the many reputational benefits our enhanced regulatory system provides. We’ve also heard from industry delegates who have come to the booth to express their appreciation for the quality service and top-notch regulation of our captives and commercial insurers.”

Bermuda is one of three major insurance centres, and the single most important property and catastrophe market. The island is also the largest captive insurance market—with 800 captive insurance companies generating over $48 billion in annual gross written premiums, and has the largest depository of ILS listings (more than $19 billion worth on the Bermuda Stock Exchange, more than 75 percent of the world’s capacity). A total 64 new insurers were registered in Bermuda in 2015.

“We’ve demonstrated again the collaboration between public sector and private is as strong as ever, and unrivalled, which is critically important in these times, ” noted Paul Scope, Chair of Willis Towers Watson Bermuda. “Our jurisdiction is at an interesting juncture in its development. There are a lot of good indicators of growth; at the same time, we continue to deal with well-established headwinds. Providing a strong presence at RIMS is essential. The Bermuda market is as buoyant as ever, creating new excess capacity for perils such as cyber and transactional risks.”

The BDA hosted its annual networking reception Tuesday evening, an invitation-only event for key industry representatives and other executives.