The General Assembly of HELMEPA 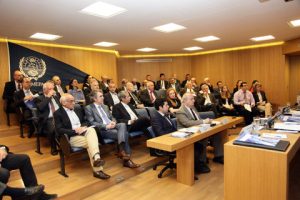 On Friday 22 April 2016, CERES, the oldest Associate Corporate Member hosted the 34thAnnual Regular General Assembly of HELMEPA at their premises, at the same place where the Association was founded 34 years ago.

Dr J. Coustas chaired the Assembly, with acting Secretaries Messrs S. Vlachos, of CARRAS (Hellas) SA and M. Gavriil, of DIANA SHIPPING SERVICES SA. The Chairman thanked his colleagues at the Board, the Director General, Mr. D.C. Mitsatsos and the staff of the Secretariat as well as all the Members of the Association for their excellent cooperation. “Although HELMEPA’s message is deeply rooted in the Greek maritime community” he said “it must be spread even more widely”. He spoke about the activities of 2015 stressing the significance of the acquisition of the Bridge Simulator, kindly donated by DNV GL, Associate Corporate Member.

The Assembly approved unanimously the activities of 2015 presented by the Director General, who offered to Dr Coustas HELMEPA’s commemorative emblem, thus expressing the appreciation of all for his service as Chairman and his drive towards innovation. Dr Coustas stressed that he will continue to support HELMEPA’s initiatives as it constitutes “the social facet of Greek shipping”.

The atmosphere became highly emotional during the intervention of Dr Matthaios Los, Founding Member and Honorary Vice-Chairman of HELMEPA, who stated the following:

“Ladies and Gentlemen, fellow Colleagues, as an old and founding Member, I would like to make two interventions: the first concerns our Chairman and the departing Board, to whom I would like – and I believe that I express the feelings of all – to say a sincere ‘Thank You’ for their work. Especially to you, our Chairman and my fellow student and Doctor, John Coustas, I wish to say that you left your mark on HELMEPA, a significant mark that reached its peak with the simulator, which we all had the pleasure of admiring during the inauguration ceremony two days ago, because environmental awareness without education is not conceivable. And this is exactly what HELMEPA has been doing since its inception and must continue to do.

And my second intervention: some of you may not know that amongst us today we have a hero. A man, who actedwith great braveryduringtheeventsinCyprusin the 1960s and suffered injuries for his Country. He was acting under cover and his oath of silence was not disclosed and acknowledged by his Country until only a few months ago, almost 50 years later. His heroic actions confirm the values of the older generations under the triptych “For Country, Religion and Family” and constitute an example for the younger generations, in which these values are systematically degraded. This man has been working for many years in HELMEPA with consistency and passion for what he enjoys doing. I think that now is the right moment and the appropriate occasion, during our Assembly, to pay the homage and respect that this person so much deserves: Thank you Captain Dimitris Mitsatsos!”

The words of Dr Los were received by all present with extensive applauds and a standing ovation. Dr Coustas and Mr. Mitsatsos wholeheartedly thanked the Honorary Vice Chairman and the Members of the Assembly. The latter came to a close with a secret ballot for the election of the 15-member Board of Directors, which met as a body with the following composition:

The new Chairman, Dr G. Gratsos, thanked his colleagues for their trust in him and the departing Board for the new impetus they provided to HELMEPA through the use of new technology and the enhanced refresher training of the human element, “which are significant developments leading the Association in the right direction”.