“You never know what will happen in Hyères” 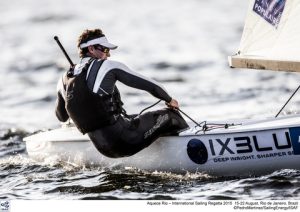 Jonathan Lobert at the 2015 Olympic Test Even

In the words of French Olympic medallist Jonathan Lobert, “you never know what will happen in Hyères.”

Never has a saying been more relevant to the 2016 edition of Sailing World Cup Hyères with a mixed forecast and an aroma of unpredictability in the air for the Olympic and Paralympic classes as the clock ticks down to Rio 2016.

A glance at the forecast indicates the sailors are in for a week battling with the elements. Gusts up to 50 knots were reported overnight and it was strong for practice throughoutMonday. A breeze in the region of 18-25 knots is predicted for the start of racing onWednesday 27 April and will be an ultimate test for all and as Lobert said, you never know what will happen.

A moment of calm in between Thursday evening and Friday morning will be a welcome respite for some of the lighter sailors, but it’s full on from Friday afternoon until Sunday 1 May’s televised Medal Races which will be available on World Sailing’s YouTube Channel –https://youtu.be/8HNURakIT7o

“The weather forecast at the moment is showing a lot of wind, ” smiled the 6 foot 3-inch Lobert, bronze medallist at the London 2012 Olympic Games. “The winds pick up in the afternoon and then it’s strong into the evening. I think it will be mostly windy this week but you never know what will happen in Hyères.” 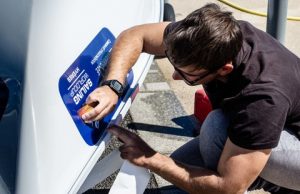 A 25 knot breeze is on the limit for the high powered fleets, such as the 49er, 49erFX and Nacra 17 but for the Finn class giants, it brings smiles to their faces.

“For us it’s always nice to be sailing in the big breeze. The Finn is a very nice boat and when it is windy you can still manage it very well and on the downwind it can still be very powerful and fast.

“It is very exciting for us, ” concluded Lobert.

Lobert has booked his spot at Rio 2016 and the pressure to perform in Hyères is off. For his rivals it is a different story. Jake Lilley and Oliver Tweddell continue to fight it out for the Australian spot whilst Canadian, Croatian, German and Kiwi sailors are all in Hyères aiming to get one up on their compatriots to reach Rio.

Many of those vying for national selection will have their eye on their national team mates which could open to the door for a mixed week of results.

For those who have already qualified, trial and error and the drive for perfection before the summer showcase will be the aim of the game. Make a mistake now and it can be worked on, make a mistake in 102 days and it is game over. But still, you never know what can happen in Hyères and as for what will happen in Rio, time will tell.

Danelec Marine to Present at Technology Seminar in Singapore