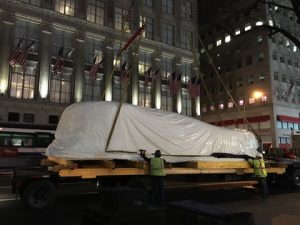 Arrived at destination – the sculpture on its way through Manhattan

New York,  26 April 2016 – There’s a unique new artwork on display at one of Manhattan’s best-known cultural hubs, and it was GAC that delivered it from Europe to the Big Apple.

Van Gogh’s Ear, a sculpture by Scandinavian artists Michael Elmgreen and Ingar Dragset, is now standing in pride of place outside the Fifth Avenue entrance to the Rockefeller Center.  It’s hard to miss, as it takes the form of a 10m high 1950s-style swimming pool in the shape of an ear, as a reference to the rumour that Dutch artist Vincent Van Gogh cut off his own lobe in 1888. It’s there as part of an exhibition organised by the New York Public Art Fund.

As GAC UK’s Dominic Watson explains, it took the skills of some logistics masters to get the 3500kg sculpture from the factory where it was created in Poland to Manhattan. 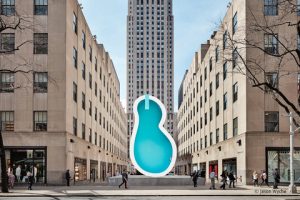 “Masterpiece International, the art shippers, having worked with GAC on transporting smaller pieces before, approached us with this opportunity late last year, ” he says. “I was confident that we had what it would take to deliver this unique work of art due to our experience in handling highly valuable and delicate items for various events and projects.”

Plans were drawn up to load the sculpture onto a low loader truck for the road trip to the German port of Bremerhaven, where it would be loaded onto a RoRo ship heading for New York City. Special permits were also arranged which covered the schedule for night-time movement and a police escort. Time was tight, as there was only one ship sailing out of Bremerhaven that would arrive in New York by the deadline, but it would be enough – just.

Change of plan
But when it became clear that Van Gogh’s Ear would not be ready in time, a new plan had to be drawn up at the last minute. It was redirected to Zeebrugge to meet the same vessel when it arrived at the Belgian port three days after leaving Bremerhaven. Restrictions still applied, with the loaded truck only allowed to crawl the 1300 km between the hours of 2200 and 0600, and an unplanned road closure meant it had to take a major diversion. It arrived in Belgium just one day before the deadline.

Meanwhile, plans were drawn up to fly the finishing touches of the artwork – steps, diving board and unique paint – to New York, to wait in Manhattan when the main superstructure arrived on a truck from the port.

Saved the day
Andrew Pearlstein, Vice President – General Freight of, Masterpiece International, says the GAC team saved the day: “The Installation at Rockefeller Center was a huge success, and that largely thanks to the efforts of GAC’s team in Europe working to getting this important and delicate artwork delivered on time and intact. Their determination and diligence within a timeframe that allowed no room for error, despite being thrown a few curve balls, was admirable. So too was their attention to detail to ensure Van Gogh’s Ear made it safely across the Atlantic.”

Sandra Stemmer, Studio Manager for the artists, adds: “GAC did a very dedicated, careful and professional job and also were highly flexible and creative in solution finding, which is really important when you work in the art world. Michael Elmgreen & Ingar Dragset and the studio are very happy and look forward to working on other projects with them in the future.”

The sight of a giant blue ear-shaped pool making its way through the city streets and being erected on Fifth Avenue caused quite a stir, even among New Yorkers, and it was featured in the local TV News.

The “Blue Star 1” maneuvering at the Port of Chios