RNLI issues its own call for help…

RNLI issues its own call for help, as Mayday fundraising events sweep the nation

The Royal National Lifeboat Institution’s (RNLI) annual fundraising event, Mayday, has been launched today (Tuesday 26 April) and will run until Bank Holiday Monday (2 May), aiming to raise £750, 000 to support the charity’s lifesaving service.

To kick off the campaign, prima ballerinas and Premiership rugby players have shown their support by swapping their ballet pointes and rugby boots for the RNLI’s iconic yellow wellies.

The Birmingham Royal Ballet performers and Wasps players were trying out their signature moves but without the crucial footwear that aides them so well in their jobs, instead swapped for bright yellow wellies.

James Haskell, England rugby star and Wasps captain, urges the public to support the RNLI’s Mayday campaign: ‘As rugby players our training is pretty gruelling – we’re always pushing ourselves to the max in all kinds of weather conditions, but at least we know when we’re expected to perform! 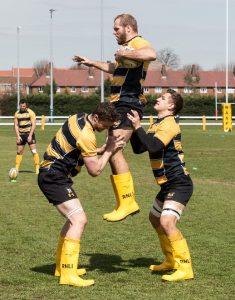 ‘That’s why I have so much respect and admiration for the volunteer RNLI crew members as they drop everything in an instant to respond to a distress call to go out on a rescue, no matter what. The shoot has been fun although there is a serious message, so I’m asking everyone to help this amazing charity continue its essential lifesaving work by supporting them this Mayday.’

Fundraising events are taking place right across the UK and Ireland, many with a yellow welly theme in a nod to the lifesaving kit that RNLI lifeboat crew members wear on their feet when saving lives at sea. Today, approximately 250 RNLI volunteers will be shaking collection buckets at train stations across London in support of Mayday.

Fundraisers up and down the land will be selling yellow welly pin badges, so people can show their support for the RNLI’s volunteer crews this Mayday, while the public can also show their support on social media by using the hashtag #MaydayEveryday.

This year, the RNLI is the Tour de Yorkshire’s charity of the year, with all funds raised supporting Mayday. The prestigious cycle race runs from Friday 29 April to Sunday 1 May, with RNLI fundraisers set to collect donations from spectators on all three days of the event. Furthermore, over 90 amateur riders are raising money for the RNLI by taking part in the event’s sportive race for the charity, which takes place on Sunday 1 May.

Chris Speers, volunteer lifeboat crew member at Poole lifeboat station, in Dorset said: ‘RNLI volunteer lifeboat crews around the UK and Ireland are willing to drop everything to go and save lives at sea when their pagers beep. The Mayday campaign is our own call for help, as we rely on the generosity of the public to help us continue our lifesaving service, which we operate day and night, 365 days a year.’

Every day is Mayday for the RNLI’s volunteer lifeboat crews, who drop everything when the pager beeps to go and save lives at sea. They are on-call 24/7, rescuing an average of 22 people every day. Funds raised through Mayday will help them continue to save lives at sea.

To donate, find a Mayday event near you or to order a pin badge, visit RNLI.org/Mayday.