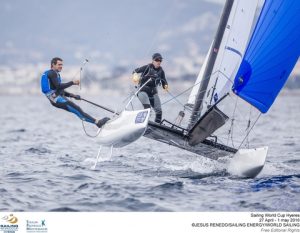 From the French Mistral to a breeze that resembled Rio de Janeiro, Hyères turned things around for the second day of racing at the Sailing World Cup.

“Sailing in Hyères today was like sailing in Rio, ” commented Swedish 49erFX leader Lisa Ericson, sailing with Hanna Klinga, “It’s shifty, it’s puffy and about having your head out of the boat.”

Rio aside, the famous Mistral that pushed sailors to their limits on Wednesday had completely died down for race day two, resulting in a wait for wind.

A building 8-10 knot breeze came through and racing kicked off just after 13:00 local time resulting in a full complement of completed races.

The 49erFX were completely blown out on Wednesday as the wind strength was well beyond the limit for the racers.  Thursday’s lighter breeze was welcomed by the sailors and they completed four good races.

Sweden’s Lisa Ericson and Hanna Klinga revelled in the conditions, picking up two bullets, a second and a tenth. They have an early advantage over Annemiek Bekkering and Annette Duetz (NED).

Twenty-four boats are racing in Hyères, four more than the size of the Rio 2016 fleet, and a number of sailors who will be on the Olympic start line are racing. The calibre of the competition resembles the Olympic Games and Ericson is just loving the competition, “This is very good preparation for Rio, we are sailing against the best people and that’s all we could ask for.

“The pressure is off for us, we have already qualified and we will represent Sweden in Rio. It’s nice to have the pressure off and to train on things we want to focus on rather than looking at another boat.”

Ericson compared the conditions in Hyères on Thursday to those that will be present in Rioin 99 days’ time. The Rio breeze is well-known for being hard to read with shifts aplenty on the water. Sailing World Cup Hyères is the penultimate Sailing World Cup event on the Road to Rio and if the Swedes replicate their performance in a breeze that’s similar then the future is bright.

The day’s other race wins went to Erica Dawson and Ellie Copeland (NZL) and Nina Keijzer and Claire Blom (NED) who are seventh and eighth respectively.

Peter Burling and Blair Tuke (NZL) picked up where they left off from the day prior, sailing consistently at the top of the 49er fleet.

A first, sixth and third helps them to retain their lead over Will and Sam Phillips (AUS) by three points. Jonas Warrer and Christian Peter Lubeck (DEN) are tied for third with John Pink and Stuart Bithell (GBR) on 38 points.

What a difference a day makes. Just 14 of 33 boats finished the single Nacra 17 race on the opening day whilst four races on day two saw four different race winners and everyone safely across the finish line, unless they were disqualified or on the course side.

“It was more about survival than sailing, ” commented Spain’s Beijing 2008 Tornado gold medallist Fernanda Echavarri, sailing with Tara Pacheco, on the day prior.

The Spanish team finished second behind Moana Vaireaux and Manon Audinet (FRA) in the single race. Echavarri continued, “When we arrived to the course it was blowing more than the limit the class can sail in. But we were there and the Race Committee said we’re going for it. The first round was really tough and then the second round we were just surviving. I think 99% of the fleet capsized and there were many damaged boats.

“We were lucky. We didn’t take any risks because even in normal conditions you could capsize but we could finish the race without capsizing. If you don’t capsize in those conditions, it usually means you’ve had a good race. We were lucky to be one of those guys.”

Things were completely different on the second day as a lighter breeze came through but the Spaniards continued their form with four top eight finishes, leaving them eight points clear of Billy Besson and Marie Riou (FRA).

Anne Marie Rindom (DEN) was head and shoulders above the Laser Radial fleet, posting a pair of race victories to propel her up to third overall.

The Dane struggled in the larger breeze on day one, recording an 11th and 22nd, but the lighter conditions suited her tremendously. She won the first race of the day by ten seconds over Josefin Olsson (SWE) and then killed the competition in the second, finishing more than 40 seconds ahead of overall leader Evi Van Acker (BEL).

Van Acker held onto her overnight lead with a 3-2 and Veronika Fenclova (CZE) is second overall.

Germany’s Philipp Buhl remains in first place in the Laser but he is discarding a hefty 20 points. Fortunately for Buhl, those around him also discard sizeable scores but the points remain close.

Buhl leads on 11 points, two ahead of Tom Burton (AUS) and four ahead of Nick Thompson (GBR).

Mat Belcher and Will Ryan (AUS) retain their lead in the Men’s 470 but they didn’t have things go entirely their own way. From thriving in the Mistral the day prior, they opened up their with a 17th. They hit back, though, winning the second and ending the day on four points.

Croatia’s Sime Fantela and Igor Marenic (CRO) were the kings of consistency, notching up a pair of seconds and as a result sit second.

Hannah Mills and Saskia Clark (GBR) moved into pole position in the Women’s 470, taking a sixth and a bullet. They are tied on nine points with their great rivals Jo Aleh and Polly Powrie (NZL), but lead on countback.

Much like the day prior, Pawel Tarnowski (POL) had two ups and a down in the Men’s RS:X. He won the opening race, followed up with a second before a 22nd, which he discards. Nonetheless he is leading on 22 points. Nick Dempsey (GBR) and Pierre Le Coq (FRA) follow in second and third.

London 2012 bronze medallist Zofia Noceti-Klepacka (POL) grabbed the lead in the Women’s RS:X but Bryony Shaw (GBR) is hot on her heels two points behind.

Australia’s Jake Lilley did his Olympic selection chances the world of good with double bullets in the Finn. The result of his race victories is the lead in the Finn and he sits six points clear of Giles Scott’s conqueror Josh Junior (NZL).

Oliver Tweddell (AUS) remains in contention of his compatriot in third.

In the lighter Hyères breeze, both the 2.4 Norlin OD and the Sonar completed two races as part of the morning schedule which brought in the much needed discard for some of the unfortunate few who didn’t fare well in the opening day breeze.

In the 2.4 Norlin OD, Australia’s Matthew Bugg added a second and third to his race one bullet to sit on top of the leader board ahead of Norway’s Bjonar Erikstad and Great Britain’s Helena Lucas.

Both Erikstad and Lucas got a bullet a piece from the two on offer and are just ahead of a strong chasing pack consisting of Antonio Squizzato (ITA) in fourth, Heiko Kroeger (GER) in fifth and World Champion, Damien Seguin (FRA) in sixth. Kroeger will be pleased with a 3, 4 for the day following a now discarded DNF.

Great Britain’s Hannah Stodel, John Robertson and Steve Thomas lead the Sonar fleet with a bullet and a discarded sixth from their races. They sit on two points.

Two is the magic number for USA’s Alphonsus Doerr, Bradley Kendell and Hugh Freund as they score a 2, 2 for the day which moves them up to, you guessed it, second overall. The solid performance comes a day after their Paralympic selection was announced by US Sailing.

Uncertainty continues in the Shipping Markets; Geopolitics in a total mess