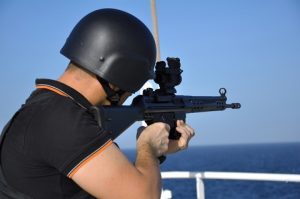 The Protection of Cyprus Flag Ships from Acts of Piracy and other Unlawful Acts Law 77(I) 2012, hereinafter referred to as “the Law”, is the leading authority regarding the implementation of security measures on board Cyprus flag ships,   which complements the ISPS Code, implemented through the addition of Chapter XI-2 of SOLAS which Cyprus ratified in 1984.

The ISPS Code applies to any ship on international waters of 500GT or more and also ports serving such ships. The main objectives of the ISPS Code are:

The effect of the Law

The Law provides the requisite legal guidelines for Shipowners, Bareboat charterers and Ship-managers with regards to measures they need to implement for a passage through the High Risk Areas ( “HRA”), how they can engage the services of a Private Ship Security Company, (“PSSC”) for a transit through the HRA as well as the procedure that a PSSC needs to adhere to prior to acquiring a licence to provide such services on board Cyprus flagged vessels.

The Law also provides that only PSSCs who are certified to provide security related services on board Cyprus flagged vessels are allowed to embark security guards and weapons for such transits through the HRA. A complete, updated, list of the approved PSSC’s can be found online at the Cyprus Department of Merchant Shipping website at www.mcw.gov.cy

It is worth noting that the Law has a global geographical application and each person on board the vessel is bound by the laws of Cyprus regardless of the fact that the vessel might be transiting on International waters. For ease of reference the First Schedule of the Law provides the coordinates and defines the High Risk Areas.

Obligations to inform upon entering a HRA

It is an obligation of the master to register with the Maritime Security Centre for the Horn of Africa (MSCHOA) and report to the United Kingdome Marine Trade Operations (UKMTO) to be monitored regarding any incidents during a transit through the HRA. This means that any event which might be construed as an unlawful act or attempted unlawful act needs to be transmitted for further investigation. The Law also allows the master and crew to arrest any person who boards or attempts to board the vessel to commit any unlawful act.

Obligations regarding services of PSSC and weapons

The engagement of a PSSCs is effected through with a written agreement between Shipowner/Charterer or Manager and the PSSC. (usually with a GUARDCON or amended form of it) The Master has the obligation to supervise the implementation of the agreement. The storage of firearms must be done in such a way as no other person on board has access apart from the PSSC when that is deemed necessary and when in the HRA.

Approval of a PSSC under Cyprus flag

This can be done for any PSSC which is incorporated under the laws of Cyprus or has a legal representative in Cyprus. It is a criminal offence for a PSSC to embark guards or weapons on board a Cyprus flagged vessel without being authorised to do so. If the PSSC is a company that has its registered office central administration or principal place of business in another country an authorised representative must be appointed in Cyprus. An authorised representative can be a citizen or a resident of Cyprus as per the Income Tax Laws of 2002 to Law (No.2) of 2011. This encapsulates both partnerships or companies incorporated under the laws of Cyprus provided they conduct business operations in Cyprus and employ permanent personnel in Cyprus. The authorised representative is only required when the Private Ship Security Company has its registered office, central administration or its principal place of business is in another country.