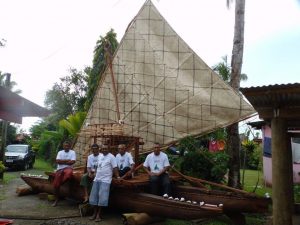 Canoe with craftsmen. Photo by Steven Hooper, courtesy Fiji: Art and Life in the Pacific at The Sainsbury Centre for Visual Arts, Norwich.

A newly-built sailing canoe in traditional natural style, commissioned for the major Fiji exhibition which will open in the east of England in October, is to be part of the Queen’s 90th birthday pageant at Windsor. It will be accompanied during the ceremonies by 45 members of the Fijian Army Band and Dancers.

The canoe was built specially for Fiji: Art and Life in the Pacific which will run from October 15 2016 to February 12 2017 at the Sainsbury Centre for Visual Arts at the University of East Anglia in Norwich. 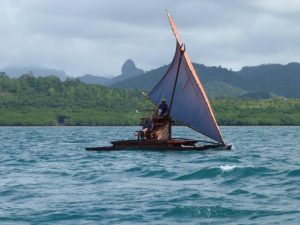 Canoe takes to the water. Photo Steven Hooper, courtesy Fiji: Art and Life in the Pacific at Sainsbury Centre for Visual Arts, Norwich.

Her Majesty’s 90th Birthday Party “will be a celebration of her life, her love of horses, her dedication to the Commonwealth and international affairs and her deep involvement with the Navy, Army and ­­­­Air Force, ” according to the organisers.

The celebration takes place in Home Park in the grounds of Windsor Castle on the evenings of May 12-15 2016. A total of 25, 000 visitors expect to enjoy a spectacular programme of music, song, dance and equestrian displays. Each evening the event will be attended by a member of the Royal Family, with the Queen attending on the final evening. It is planned to also hold a pre-performance party for 5, 000 other spectators on The Long Walk on the final evening.

Professor Steven Hooper, a curator of the Fiji exhibition, said the canoe was shipped to the UK in a 40ft container for the exhibition, but is making a detour to Windsor Castle to feature in the pageant as part of the Fiji performance. The craft was delivered to Windsor on April 14. After the exhibition in Norwich it will go on permanent display at the National Maritime Museum in Greenwich, in its new Voyagersexhibition gallery, opening in 2018.

The canoe is 26ft (8 m) long and 7ft 2in (2.2 m) wide. Its size was dictated by the width of the container which transported it to the UK. Four people can sail with the vessel, which is named Adi Yeta, in honour of the German exhibition manager, Henriette [Jette] Pleiger, who championed its sponsorship at the German National Exhibition Centre in Bonn. Adi is an honorific in Fijian meaning Lady. 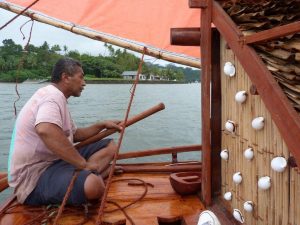 When the organiser of the pageant, Simon Brooks-Ward, heard about the canoe coming to the UK he asked if it could be incorporated into the event to add cultural flavour. It was further agreed that Joji Misaele (head of the Department of Mechanical Engineering at Fiji National University and a canoe sailor originally from the small island of Ogea in eastern Fiji) should come to the UK to look after the canoe and its appearance in the performance.

Joji (the Fijian version of George] Misaele has a deeply personal interest in sailing and safety because when he was living as a boy on Ogea a member of his family was lost at sea in a canoe accident.

Mr Misaele is interested in assisting with the recovery of ancient canoe-building skills, especially those used to build the massive 30 m vessels of the past, whose hulls were constructed from multiple planks sewn together with coconut husk fibre cordage. He is keen to pursue his safety-features research and to build a much larger double-hulled canoe of 15-20 m in length, made with the old plank-building techniques.

The lead craftsman on the canoe exhibition project was Setareki Domolailai from Vulaga Island (near Ogea in Lau), who comes from a line of canoe builders.

The canoe was built as the result of a British Government (Arts and Humanities Research Council) sponsored research project,  Fijian Art (2011-2014), in which Fiji Museum, the national museum, was a partner. 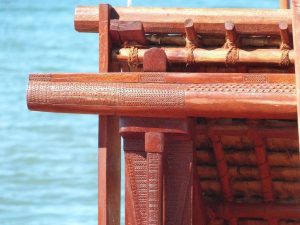 Part of the deck house. Photo by Steven Hooper.

Mr Misaele and his relatives had recently built an outrigger canoe that had won races in the annual Hibiscus Festival on Suva Harbour. He was commissioned to supervise the building of a high-quality double-hulled canoe (drua) for exhibition in Europe. The canoe was built over five months in 2014-15 and is entirely composed of renewable resources – local hardwoods and coconut husk fibre, with leaves for the house roof. There are no metal components. It is decorated with white cowry shells in the manner of the canoes used by chiefs.

In the 19th century enormous double-hulled sailing canoes were built in Fiji, more than 100ft (30 m) long, which could transport 150 people on long voyages around Fiji and to Tonga and Samoa. Although the building of simpler and smaller outrigger canoes has survived in remote islands in Fiji for local inter-island transport, the building of double-hulled canoes has declined.

They are ‘shunting’ canoes, which can sail either end forwards by swinging the mast fore and aft and moving the point of the sail from one end of the main hull to the other. That means they are highly manoeuvrable and in the 19th century they are said to have ‘run rings’ around European sailing ships. One of this type of canoe chased Captain Bligh of the Bounty out of Fijian waters after the mutiny in Tonga in 1789. He was lucky because the wind was directly astern of his small launch, the least favourable wind position for Fijian canoes. 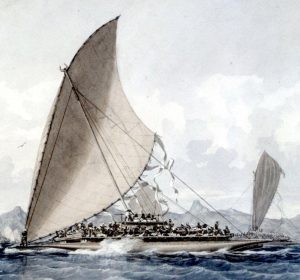 Prof Hooper says canoe construction is of more than sentimental value, as canoe-building could become an aspect of rural development, for example if islanders were paid to supply canoes for use in Fijian hotels – as an exciting alternative to the usual catamaran offerings. This would allow young men to stay on their outer island homes and earn a living, preserving distinctive cultural skills.

Shipped to the UK with the canoe was a pair of wooden gong drums, which are used in Fiji for signalling, for church services and ceremonial occasions. It is planned that these drums, with their deep resonant tone, will be beaten at the beginning of the Fijian section of the pageant. The man nominated to beat them is a Fijian member of the Household Cavalry based at Windsor, Iowane Veramu.

The huge number of pageant participants will reflect the Queen’s private and public interests. In addition to Fiji, performers will come from countries including Oman, Chile, New Zealand, Canada, Australia, Azerbaijan and the UK.  The military will be well represented and will include The Queen’s Mounted Troops and more than 100 pipers.

Over 90 minutes each day, 900 horses and more than 1, 500 participants will create a joyful event for The Queen. The 90-year ‘journey’ goes from the excitement of the royal birth, through to World War Two,  marriage, the coronation and a reign of more than 60 years. The event will be televised on ITV the evening of Sunday May 15 in the presence of Her Majesty.