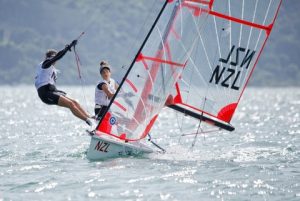 The Notice of Race for the 2016 Youth Sailing World Championships has been released.

Based out of the Torbay Sailing Club with sailing taking place in the waters of Waiake Bay, World Sailing expects around 400 competitors from up to 70 nations to participate in the championship which will include participants of World Sailing’s 2016 Emerging Nations Program.

The championship attracts only the best youth sailors from around the world and competition is notoriously tough as competitors are selected by their Member National Authority (MNA) from a host of eligible sailors within each nation. To compete at the Youth Worlds, sailors must be under the age of 19 years old on the 31st December 2016 and be nominated by their MNA.

The Notice of Race states the key conditions for the nine sailing events at the 2016 Youth Sailing World Championships and includes details on the rules, regulations, entry guidelines, format, scoring, schedule, venue and courses.

About the Youth Worlds

The Youth Worlds was first held in Sweden in 1971. The 2016 Youth Sailing World Championships in Auckland, New Zealand will be the 46th edition of the championship.

Australia is the current holder of the Nations Trophy, awarded annually to the top performing nation at the Youth Worlds. France is the most success nation through the history of the Championship, winning the Nations Trophy on a record eleven occasions and holding a record 76 medals: 28 gold, 30 silver and 18 bronze.