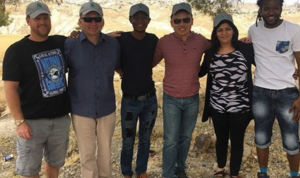 A youth mission including transport workers from South Africa, UK, Australia and Canada has just returned from Palestine. The group were representing ITF unions SATAWU, Unite the Union, MUA and Unifor.

14/05/2016 – The visit was part of a commitment from the ITF to building industrial solidarity and effective responses to the challenges faced by transport workers in the region.

Delegates met drivers at the ITF Palestinian truck drivers’ project at the Irtah crossing between Palestine and Israel. They spoke to them about how the project – which offers shade, a canteen and toilets at the crossing where they often experience long delays– has benefited their working lives. The ITF is currently investigating potential locations for a second project of this kind.

Youth delegate Simon Lau from Unifor, Canada which sponsors the project said: “I’ve had the opportunity to speak with drivers, speak with the project manager here and the consensus is that this project really matters to them, it not only improves their lives it also creates greater unity. This crossing has helped to recruit more members, to organise truck drivers and that creates greater solidarity. That’s what the union movement is all about.”

The delegation also met with the Palestinian Minister for Transport, the women’s committee of the Bethlehem branch of the General Union of Transport Workers’ in Palestine (GUTW), the union’s youth committee and the leadership of the Palestinian union federation the PGFTU.

Each delegate has pledged action in response to their experiences and research during the mission. Read about their plans and more details of the trip in the ITF youth in Palestine blog.