Healthy Seas: A Journey from Waste to Wear…

Lily Venizelos at the podium

Healthy Seas: A Journey from Waste to Wear – a remarkable example of the Circular Economy at work

Athens, 19 May 2016 – A special event to celebrate the Circular Economy has taken place in the shadow of the Acropolis.

On the 17th of May, MEDASSET celebrated the first anniversary of its successful coordination in Greece of the European Initiative, Healthy Seas: A Journey from Waste to Wear. The top floor Galaxy Bar at the Athens Hilton was the venue for the presentation of the innovative collaboration between several European partner organisations that are acting to remove abandoned fishing nets, also known as “ghost” nets, from our seas where, caught up on rocks and wrecks, they continue to pose a deadly threat to all kinds of marine creatures, such as sea turtles, dolphins and seals. The salvaged nets, along with other waste, are recycled to create premium quality ECONYL® yarn that can be used to create new clothing, carpets, and other consumer products.

During the first part of the evening the guests were given the opportunity to hear about the consequences of “ghost” fishing and of the benefits that can be derived from the implementation of a more circular business model. This can provide environmental improvements while it creates opportunities for job creation and sustainable development.

Keynote Speaker, Mr Argyris Peroulakis, Deputy Head of the Representation of the European Commission in Greece, emphasised the importance of changing our economic model, particularly in the light of the Commission’s undertaking that it will, until 2020, provide 650 million euro-worth of support to businesses that are active in the circular economy from within the EU’s Research and Innovation Programme’s budget.

During the second part of the evening, the three young fashion designers that came top in a competition organised by MEDASSET in collaboration with AKTO College of Art and Design and DoItEco Project, were awarded their prizes. From an initial field of 23 competitors, 10 went on to realise their vision in the “Healthy Seas: A Journey from Waste to Wear Fashion Project”. Each item of clothing was made with fabric woven from ECONYL® yarn, while some of the unique creations also included other eco-friendly materials.

Orsalia Partheni, Anna Stamatiou, Angeliki Antonopoulou and Nopi Romanidou evaluated the creations of the 10 designers and awarded the top prize to Katerina Rigopoulou. Giorgos Voulgaris took second place, and third was won by Aphroditi Michailidi. We should add that the fifth member of the judging panel was the general public, which was invited to choose its favourite designer via MEDASSET’s website. Between 5 and 11 May 1, 774 people took part in the public vote. 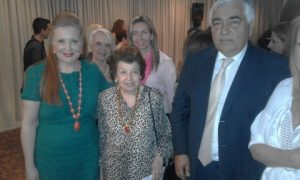 Lily Venizelos with Irene S. Daifas on the left and other guests

The Hilton Athens sponsored the event.

Pleased to see many from the Greek Shipping fraternity, including Professor and Mrs. C. Moutzouris, the ever present and charity champion Irene S. Daifas, Theodore Polydoros, Fotini  Livanos, Eleni K. Dracopoulos, Liza Hadjidakis – Spiliotopoulos, Mrs. Mavroleon and many others.

Founded in 1988, MEDASSET is an international environmental NGO registered as a charity and limited liability company in the UK and a Permanent Observer-Member to the Bern Convention, Council of Europe. MEDASSET is working closely with MEDASSET Greece – a not-for-profit organisation established in 1993 in Greece, which is a partner to the UN’s Mediterranean Action Plan (UNEP/MAP). Both organisations are active in the study and conservation of sea turtles and their habitats throughout the Mediterranean. Common goals are achieved through scientific research, environmental education, lobbying relevant decision makers, and raising public awareness.

About Healthy Seas – a Journey from Waste to Wear

Healthy Seas is an international initiative that recovers abandoned fishing nets that pollute our seas and coasts and thanks to theECONYL ® Regeneration System the contained nylon  is regenerated into high-quality yarn which is then turned into brand new sustainable textiles.

Made from 100 percent regenerated nylon waste materials, Aquafil’s ECONYL fiber helps divert global waste streams from landfills and oceans and is used to produce a wide range of textile products such as sportswear, swimwear, and carpets. Aquafil started the ECONYL Regeneration System as a sustainability initiative in 2007 and within four years it became an important milestone and commercial driver within the company, representing a significant step towards the company’s involvement in the circular economy. The ECONYL Regeneration System is the world’s most efficient industrial system for the production of Nylon 6 and is unique in that it boasts no loss of quality after reclamation and transformation of nylon waste. For more information, visit www.econyl.com or @ECONYL