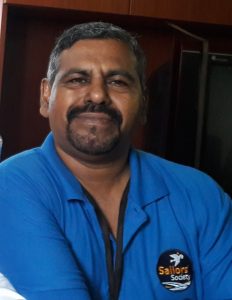 A chaplain from international maritime charity, Sailors’ Society, will travel to the Indian city of Madurai on June 1 (today), to help lawyers challenging the five-year jail terms given to the MV Seamen Guard Ohio crew.

The vessel was engaged in an anti-piracy operation in October 2013 and travelled to Tuticorin as it was running low on fuel. The prosecution claims that the vessel anchored in Indian waters to refuel.

Reportedly unaware the fuel used was smuggled, the crew was arrested and during investigations, the vessel’s weapons’ certificates were found to have expired.

In January, the 35 men were found guilty of weapons charges and given fines and prison sentences.

Before they were sent to Puzhal prison, Manoj Joy, Sailors’ Society’s port chaplain in Chennai, met with the vessel’s Ukrainian Captain and Chief Engineer.

“During the trial, I met them regularly. The Captain told me he had previously survived being captured by pirates and was thrilled when the opportunity came along to be part of an anti-piracy operation. Now they are in Puzhal prison, access to see them is a lot trickier, ” he said.

Manoj also meets the Seamen Guard Ohio’s Indian seafarers who are imprisoned in Palayamkottai jail; with no direct flights, he makes the 14-hour overnight train journey to provide the men with support.

Manoj previously worked at an international law firm as a shipping advisor and handled protection and indemnity insurance as well as crew related matters; he has been helping the seafarers’ lawyers in preparing the appeal.

He said: “I will be in court to assist the crew’s lawyers on shipping and technical matters.”

Manoj spent 18 years as a seafarer and joined Sailors’ Society as a port chaplain in March. He has supported the imprisoned seafarers and their families throughout the ordeal and has been helped by Sailors’ Society’s regional superintendent, Joseph Chacko.

“The men are distraught and are often in tears. I try to comfort them and tell them that we will do our best to fight their case.”

The families are too poor to travel to see them and Manoj acts as a link between the imprisoned crew and their loved ones.

“The men have not been paid in three years; school starts soon and their families are finding it difficult to afford school uniforms and books, let alone the fees.

“Their families want to know about the men’s wellbeing, as well as the legal course to be taken during the appeal procedure, ” he said.

“The families call me regularly and break down on the phone, I tell them not to lose hope.”

As well as struggling with their loved ones’ incarceration, the families are having a difficult time at home.

“Their neighbours are suspicious and have branded the men traitors for what they see as anti-national activity, ” added Manoj.

Providing emotional support to seafarers and their families is one of Sailors’ Society’s key missions, and despite the long distances, Manoj is able to provide much needed support.

“The seafarers are totally dejected, they were only engaged in protecting other seafarers in the Gulf of Aden from piracy and don’t understand why they’ve been jailed.”