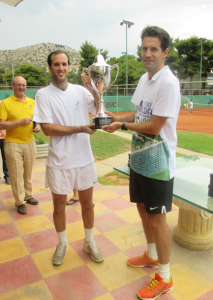 Alexandros A. Tsavliris and Apostolos Kaltis

Alexandros A. Tsavliris of TSAVLIRIS SALVAGE GROUP took part in the Posidonia  2016 Tennis Tournament with tennis partner  Apostolos Kaltis of Neptune Lines which was hosted by Ken Scott of Winter Scott and Louise Glover of E.G. Arghyrakis & Co., at Vouliagmeni Tennis Club on Tuesday 7 June 2016. The dynamic duo was successful in winning the Cup out of a group of around 20 couples.

This year’s final opponents were Aris Pittas of Eurobulk and John Minaidis of A.M. Nomikos.

Alexandros follows in the footsteps of his father Andreas  A. Tsavliris   who has also previously won the Cup on three different occasions.