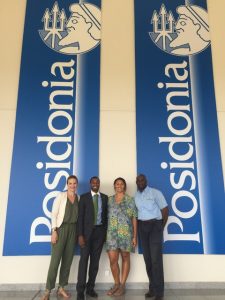 Bermuda Business Development Agency (BDA) representatives joined Bermuda government and industry colleagues for first-time participation at Posidonia 2016 at the Metropolitan Expo in Athens June 6–10. The biennial event, the world’s largest shipping conference, attracted an estimated 20, 000 attendees, including ship owners, brokers, bankers and investors who converged to discuss the future of the shipping industry.

“We had an extremely successful experience as a first-time exhibitor at this event, ” said BDA Business Development Manager Kevin Richards, who was joined by Registrar of Shipping Edward Robinson of the Department of Maritime Administration (DMA), London-based DMA Senior Marine Surveyor Chris Boreham, and Victor Richards of Conyers, along with BDA conferences and events team of Nicole Conrad Morrison and Sophie Burt.

“Attendees sought out our booth to meet with our experts and learn more about the Bermuda Ship Registry and the benefits of company incorporation in our blue-chip financial centre—as well as to find out how to get to Bermuda for next year’s America’s Cup, ” he added. “The ability to connect with the entire shipping value chain separates Bermuda from our competitors. Our strong financial foundation makes our jurisdiction favourable to banks and financiers when leveraging an offshore facility in a new building or ship-financing transaction. Our leading regulatory standards also make Bermuda an attractive option for residency and trust incorporations for high-net-worth individuals connected with this industry.” 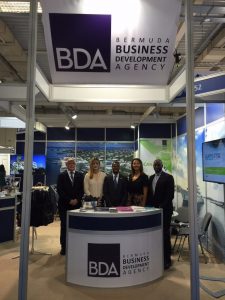 Ships or yachts registered in Bermuda fly the red ensign, or the red ensign with Bermuda’s coat of arms. Other members of the REG include the Isle of Man, Gibraltar, Cayman Islands, British Virgin Islands, Guernsey, Jersey, Anguilla, Turks and Caicos, Falkland Islands, St Helena, Montserrat and the UK. Certified to the top (ISO 9001:2008) quality management standards, Bermuda ranks high in the white list of the Port State Control regimes of both Paris and Tokyo MOUs and is recognised by the United States Coast Guard in its QUALSHIP 21 quality shipping programme.

Bermuda’s international shipping registry was launched in 1789 by Her Majesty’s Customs to facilitate registration of Bermuda sloops. The registry was also used by ship owners from the UK and other British colonies for international trade. Re-established in 1980, with contemporary legislation and maritime conventions extended by the UK government, the registry is respected for the high standards of its ships and the world-class service it provides.

Pre-conference activities at Posidonia also allowed the Bermuda team to network with key companies in the industry. Organisers staged a sailing race, a running event and golf and soccer tournaments. The BDA’s Richards, a former Bermuda national team player, took part in the latter, joining the “Shipsoccer” team of global accountancy firm Moore Stephens. The team went undefeated during group stage, but lost out in the event’s quarterfinals.

“We were able to solidify key relationships with senior leaders of major shipping companies, ” noted Richards, who will also attend the 29th annual Marine Money Week in New York City June 21–23; the event is one of the world’s largest gatherings of the international ship-financing community, attracting more than 1, 300 leading ship owners, private- and public-equity investors, and commercial and investment bankers.

“Our agency looks forward to working with new and existing partners to continue to grow the shipping industry in Bermuda.”

The BDI goes under, so does Democracy