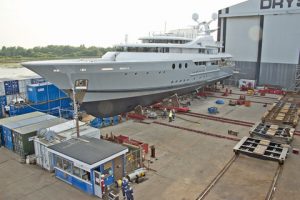 Who’s that Lady: The superyacht is ready for launch at Portchester

Burgess Marine has today successfully launched the 55m Superyacht, MY Lady A, from its ship lift facility in Portchester, Portsmouth.

The refit took just 10 months and has been deemed an ‘outstanding success’ by the Owner’s Team.

The vessel will complete its commissioning in Southampton and then head to the Mediterranean for the summer season.

With workshops and offices in Lowestoft, Dover, Portsmouth, Portchester, Southampton, Marchwood, Poole, Avonmouth, Devonport, and within STP Palma the business is ideally located not only to support the UK’s largest passenger ports, but also shipping in general throughout the United Kingdom and Superyacht’s based in Mallorca.

Burgess Marine is an ISO 9001:2008 British Standards Institute accredited company and holds ‘DNV Approved Supplier’ status; the company is also a full member of the Association of Diving Contractors.  Click here to view all accreditations and policies.

Introducing the new and exclusive Quayside Club at...