Surge of fatal accidents in Chittagong 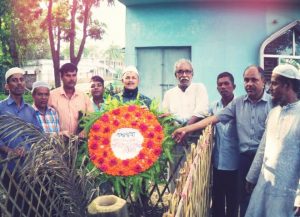 10 shipbreaking workers killed or severely injured in one month only

Brussels,  27 June 2016 – At least five shipbreaking workers have been killed and five more severely injured in a series of fatal accidents in Bangladesh in one month only. On 23 May, 21-year old Rubel died at Seiko Steel shipbreaking yard when he fell from great heights. He was working without safety equipment. Only six days later, on 29 May, 5 workers were struck by falling steel plates at the same yard which is also referred to as Darussalam or Madina Enterprise. One worker died on the spot, another in hospital. The three remaining workers were severely injured. In a third accident on 5 June at Laskar Shipbreaking, 35-year old Babul was crushed by a falling steel plate. On 19 June, two workers fell victim to a cylinder blast at Bhatiary Steel shipbreaking yard. One of the workers, Swapan, died in hospital three days later, while Mayching suffers from severe burn wounds in his face and upper body. He is struggling for his life. On 23 June, Samesh suffered severe injuries from a fall at Kabir Steel, a yard that was in the headlines in April after Kabir’s private security personnel shot at workers and locals protesting a fatal accident.

“This horrific series of accidents shows that occupational health and safety measures are absent”, says Muhammed Ali Shahin, the Platform’s local coordinator. “We are witnessing the same accidents again and again: workers are not equipped with safety harnesses and fall to their death. Others are crushed under heavy steel parts as a consequence of the dangerous gravity method by which cut steel sections are simply dropped into the sea and on the beach. Gas cylinders cannot be handled safely on the beach and explosions cause death and terrible burn wounds. As long as ships are scrapped on the beaches, workers will continue to die.”.

As documented by the NGO Shipbreaking Platform before, European-owned vessels are often involved in these accidents. The two accidents at Seiko Steel occurred while the workers dismantled the German-owned vessel Renate N. (IMO 9006851). The demolition of the ship, whose last beneficial owner was the Hamburg-based Neu Seeschifffahrt, cost the life of three workers, and severely injured three additional workers. German shipping companies, except for industry leader Hapag Lloyd, are known to show little interest in the negative environmental and social impact of their shipbreaking practices. They simply sell their end-of-life vessels to beaching yards, including the worst in Bangladesh, with the help of cash buyers.

Recently, representatives of the International Maritime Organisation (IMO), which is implementing a NORAD-funded project in Bangladesh to improve conditions in the shipbreaking yards, presented their work on assessing the social and economic impacts of the industry in Chittagong. Bangladesh members of the Platform assisted the presentation and are concerned that human rights abuses and pollution caused by the shipbreaking industry will be side-lined in the NORAD-funded study.

“Figures on GDP contribution, tax income and the amount of scrap steel imported through shipbreaking have always been used to legitimise this industry in Bangladesh. What is urgently needed is an honest cost-benefit analysis bringing environmental and human costs of beaching into the equation”, says Patrizia Heidegger, Executive Director of the NGO Shipbreaking Platform. “What benefit remains once we deduct the costs for massive coastal pollution, the threatened livelihoods of local fisher folk, the accumulation of millions of tons of hazardous waste over decades, dead workers whose families are thrown back into extreme poverty, crippled young men without a future, occupational diseases, and illegal child labour keeping young workers out of school while exposing them so severe health risk?”.

The series of fatal accidents have sparked local resistance. On 10 June, the Shipbreaking Workers Trade Union Forum together with the Bangladesh Institute for Labour Studies (BILS) organised a human chain in Sitakunda, the shipbreaking area, to protest the recent deaths. BILS and the trade unionists met with the victims’ families and visited the graves of workers recently killed in shipbreaking. The Shipbreaking Workers Trade Union Forum also handed over a letter to the president of the Bangladesh Shipbreakers Association (BSBA) demanding proper investigation and the payment of compensation owed to the families of dead workers and those workers who suffered from injuries.

The Platform calls on the Government of Bangladesh to investigate these accidents and to sanction yards with regular fatal and severe accidents, such as Kabir Steel and Seiko Steel. Moreover, the Platform demands that European ship owners stop selling their end-of-life vessels to the beaching yards of Bangladesh. It is not acceptable to turn a blind eye on the precarious situation for the sake of maximum profit – European ship owners are fully aware of the dire conditions in Chittagong and more sustainable alternatives to the beaching method exist.