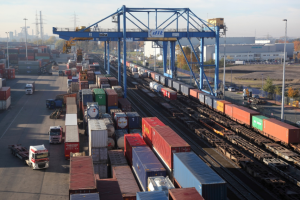 Bonn/Duisburg, June 29th, 2016: DHL Freight, one of the leading suppliers of road transport in Europe, is now further expanding its multimodal network and linking Asian overland and intermodal transportation operations with Europe and North Africa. This was announced by DHL at a joint event with Duisburger Hafen AG (duisport) at the logport site in Duisburg-Rheinhausen. DHL is further expanding its offering through the Duisburg hub with the rail transport service for groupage transport. Of particular interest to companies that can’t necessarily fill a full container on their own, the logistics supplier is also offering the option of consolidating shipments at the DHL Freight Terminal Duisburg. DHL customers thus have the opportunity to design intercontinental supply chains in an uncomplicated fashion and can additionally leverage the time and cost advantages of rail transportation compared with sea or air freight alternatives. Here, customers benefit from the advantageous geographical location of Duisburg, which results in particular from its close proximity to the European economic regions, outstanding logistic connections and excellent infrastructure.

“Use of rail networks as a transport route between Asia and Europe has proven to be a highly effective solution at DHL and is very well received by our customers as a genuine alternative. In this connection, Duisburg plays a key role as a transport hub. Shorter routes to customers and excellent intermodal connections provide many opportunities for faster delivery and the leveraging of cost advantages. We therefore intend to consistently expand this segment. Through our new LCL products in the DHL Railconnect segment, we can leverage the strengths of our overland transport networks to the great benefit of our customers, ” says Amadou Diallo, CEO DHL Freight. “And we can do so all the way to North Africa. We already have customers whose commodity flows can thus be processed from China via Europe to Tunisia through the multimodal combination of road, rail and short-sea, ” he adds.

Since 2013, DHL has been steadily expanding its multimodal network between China, Russia and Europe, and has enabled connections to the most important industrial bases in Europe and Asia through its rail links and access to ports in Antwerp, Rotterdam and Amsterdam. As a result of this expansion, DHL customers can take advantage of fixed departures each week between the Rhine/Ruhr Duisburg economic region and the business centers in the coastal region of China (Shanghai to Shenzhen). For customers with full truck loads or containers, DHL additionally offers a link to the intermodal connections within Europe in cooperation with Duisburger Hafen AG. The outstanding intermodal connections to and from southern, western and northern Europe not only enable environmentally friendly onward transportation but also ensure that Duisburg need not be the final rail destination.

“400 trains per week connect the port of Duisburg – the most important hub in the European hinterland – with more than 80 direct destinations in Europe and Asia. Through the broad range of logistics services at the site, Duisburg thus offers an ideal starting point for dispatching rail transports directly on site and ensuring efficient pre and post-transport, ” stresses Erich Staake, CEO of Duisburger Hafen AG. “Our comprehensive intermodal network has played a key role in ensuring that Duisburg has established itself in recent years as a central starting point and destination for transcontinental rail connections between China and Europe. Together with partners such as DHL, we are actively contributing to the further development of these routes and are thus strengthening Duisburg’s role as a leading logistics hub in central Europe.”

The logistics infrastructure thus affords the opportunity to process customs clearance to Europe, access a national and international pallet network and offer complete cargo transport via road, intermodally or via container trucking. The multimodal product portfolio also includes DHL’s dense road network in Europe, including multimodal hubs in Hamburg, Warsaw and Małaszewicze on the Polish/Belarusian border in which unit goods, partial or full trick loads can be directly transferred from the road to all existing rail connections. The Małaszewicze site, which DHL is consistently expanding as a gateway to and from Asia, plays a special role in this connection due to its strategically important geographic location. The expansion of the network together with a comprehensive presence in Asia allows DHL to cover the entire transport chain. By expanding the overland route via rail, DHL is creating essential value for customers through cost and time advantages.