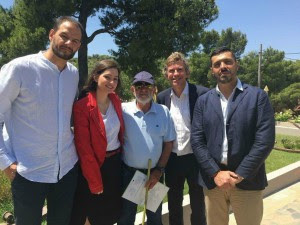 The European Maritime Social Partners, the European Community Shipowners’ Associations (ECSA) together with the European Transport Workers’ Federation (ETF) visited the Captain of the sunken Prestige oil tanker, Apostolos Mangouras in Athens on 24 June, to mark the International Day of the Seafarer.

Fourteen years after the Prestige disaster the Spanish Supreme court has convicted Captain Mangouras to two years in prison for “recklessness resulting in catastrophic environmental damage”. It thereby overturned a previous judgement by the provincial Court of La Coruña which had cleared him of any responsibility.

The Social Partners visited Captain Mangouras on the eve of the Day of the Seafarer (25 June 2016) to express their support following his conviction and refuse to accept that seafarers should be subject to such treatment.

“Captain Mangouras has paid an unacceptably heavy price for his professionalism, bravery and devotion to duty as a ship’s Master. It is a price he should never have had to pay. His unjust treatment, which began when his vessel, the mv Prestige encountered difficulties in severe weather, is still continuing nearly fourteen year since the events”, said ECSA’s Social Dialogue Committee’s chairman Tim Springett from UK Chamber of shipping. “We insist on ensuring fair treatment of seafarers following a maritime accident and stand firmly against the criminalisation of seafarers”, he concluded.

Captain Mangouras’ situation demonstrates that there is a strong case for the implementation and observance of the joint ILO/IMO Guidelines for Fair Treatment of Seafarers following a Maritime Accident. This would finally remove what has become a significant obstacle to the recruitment of the future generations of seafarers.