GAC welcomes largest ever cruise vessel to call at Lerwick 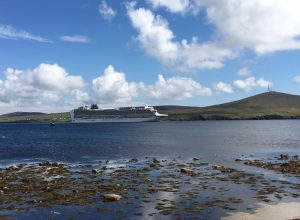 Shetland Islands, Scotland, 1 July 2016  – Yesterday (30 June) was a big day for GAC UK’s Shetlands office, as Offshore Manager Adrian Henry welcomed the P&O Cruises ship ‘Azura’ to the port of Lerwick, the islands’ capital and home to GAC’s local office. The 115, 055t beauty is the largest ever cruise vessel to have called at the port, and Adrian and his team were responsible for ensuring every second of her time there went without a hitch for her 3033 passengers and 1159 crew.

“The ‘Azura’ is even bigger than the 114, 288t ‘Costa Pacifica’ which called here in June 2011, ” says Fergus Poole, GAC UK’s Cruise Manager. “As part of our traditional inaugural procedures, Adrian presented Capt Derek Gray with an engraved silver platter and in return received a ship’s plaque which will be given pride of place on the GAC Lerwick office wall.”