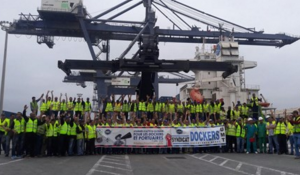 Dockers and their unions from Abidjan to Australia, Cyprus to Canada, New Zealand to Norway were among thousands from ports in over 50 countries across six continents who took part in the first international dockers’ action day on 7 July.

08/07/2016 – The International Dockworkers’ Council (IDC), the ITF and its European arm the European Transport Workers’ Federation (ETF) were joint organisers of the day.

The aim was to raise public awareness about the vital contribution dockworkers make to the world economy and the risks they face at work daily, and to highlight the growing attacks on working conditions in ports. Under the slogan ‘Defend Dockers’ Rights’ port workers called for improved health and safety, an end to job deregulation and precarious work, respect for bargaining rights and collective agreements, universal labour standards in GNTs to be respected, and for concerns over automation processes in terminals to be addressed.

ITF president and chair of the dockers’ section Paddy Crumlin said: “The show of power and energy we’ve seen from dockers worldwide is incredible. The issues port workers are dealing with – health and safety gaps, job security concerns, automation, the race to the bottom on working conditions – those things aren’t confined to one port or one country, those are worldwide. We need opportunities like dockers’ action day to raise awareness of those issues in our communities and beyond, and to say to employers, we’ve got the clout to make global action happen.”

Find out more at www.defenddockersrights.org