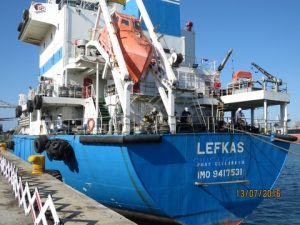 PORT ELIZABETH, South Africa, 14 July 2016   – The Port of Port Elizabeth is the proud home port of a third ship to be registered on the South African Ships Register. This marks another step in South Africa’s drive to become a recognised Maritime Nation in line with the government’s Operation Phakisa initiative which aims to unlock the potential of the country’s ocean economy.

On Wednesday, 13 July 2016, oil tanker MT LEFKAS docked at the port’s berth 100 where a ceremonial plaque exchange ceremony was officiated.

The merchant vessel was previously registered under the flag of Liberia but will be using the Port of Port Elizabeth to provide a new offshore bunkering operation in Algoa Bay. In December 2012 the concept of attracting vessels to the Algoa Bay region was identified as an opportunity to grow the maritime industry in the region. In bringing this initiative to fruition, the South African Maritime Safety Authority (SAMSA) and Aegean Bunkering Marine Services worked together to formalise the concept. 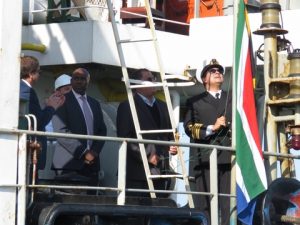 Hoisting of the South African flag

Aegean subsequently embarked on a rigorous process of securing approvals from the necessary authorities. The company has also obtained bunkering licenses from Transnet National Ports Authority to conduct bunkering operations in the Ports of Port Elizabeth and Port of Ngqura.

Aegean is the first company able to offer fuels outside port limits (OPL) in South Africa and expects to attract passing ships with bunkers at anchorage in South Africa’s Algoa Bay.

“The registration of the MT LEFKAS and other vessels that will follow is significant towards the employment of South African seafarers. Every vessel has extra accommodation that allows for the training and development of cadets. The registration of the vessel is not restricted to our bunkering operations only but also introduces many economic benefits for the people of Port Elizabeth such as surveying, offshore services and crew changes (more traffic through the airport), hotel accommodation and light and heavy manufacturing ” said, Greek businessman Kosta Argyros. 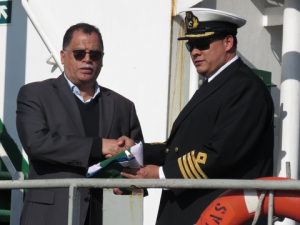 “This historic event is significant to the Port of Port Elizabeth and South Africa at large as it marks the catalytic growth in the South African Ship Registry and once again highlights Nelson Mandela Bay’s attractiveness as a Maritime City and its potential to exploit the Blue Oceans Economy”.

Previously the South African Department of Transport had noted that most shipping lines registered their ships outside the country, with the country relying on about 12 000 foreign vessels to export South African goods to the rest of the world.

The development of a locally owned commercial shipping fleet in South Africa is among the intended outcomes of South Africa’s involvement in BRICS to increase trade and co-operation.