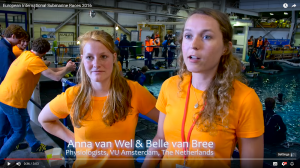 The IMarEST’s European International Submarine Races 2016, held 6th-15th July at QinetiQ’s Ocean Basin in Gosport UK, has concluded with the University of Auckland team’s Taniwha II submarine taking the winning trophy. The team proved that the combination of innovation and attention to detail makes all the difference. Their biomimetic craft was driven to impressive, near record-breaking speeds (4.7 knots) by a robust biomimetic propulsion system and a novel fish-inspired hydrodynamically efficient tail which replaced the rudder usually found on submarines.

The team from Delft University of Technology were runners up with their WASUB VI. They also won the BAE Systems Agility & Endurance Prize, the Top Speed (Male) prize for reaching 7.3 knots and achieving the best performances on Race Days 1, 2 and 3. WASUB VI is a sleek submarine driven by counter-rotating propellers. The team showed that engineering excellence and a level head is what is required to play in the big leagues. As their pilot pushed their vessel well beyond its design envelope, their engineers redoubled their efforts to strengthen and streamline the submarine as the team strove toward the world speed record. In the end, physics prevailed and the record remained unbeaten, but this fine-tuned team have set the bar high for future eISR races. 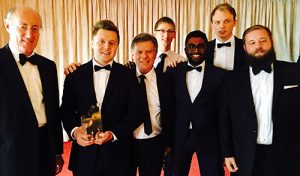 The third place team, from the University of Washington, delivered in their submarine, What Sub Dawg, an impressive machine which only missed the top spot by the slimmest of margins. Careful engineering design, coupled with extensive testing, design optimisation and pilot training produced the highest speed by a female pilot (4.6 knots).

Pilots are the sole source of propulsion in these races, driving the submarines by pedalling whilst wearing scuba gear in the fully submerged craft that they have designed and built (and continue to improve in their tank-side pits throughout the racing).

“This year, of the eighteen teams which began the competition in September, eleven managed to qualify for the racing events. Qualification involved meeting a rigorous set of technical and performance requirements which had to be documented in written, photographic and videographic formats. The over 140 students demonstrated a true passion for engineering and teamwork as they honed the performance of their own craft and helped each other to overcome the individual challenges that arose. It was fabulous to experience the really positive spirit which arose from amongst these gifted young people.” William Megill, Race Director of eISR 2016 and Professor of Bionics at Rhine Waal University.

Jon Bayliss, head of maritime platforms at QinetiQ, said: “Having been a centre for maritime design and testing for decades, QinetiQ’s Ocean Basin at Haslar is no stranger to innovation. However, the ingenuity on display at these events never fails to amaze us, and this year the standard has been exceptional. We are proud to invest in the next generation of engineers, by supporting events like this and providing opportunities for young people through graduate and apprenticeship programmes. Judging by the quality of these competition entries, the future of the industry is in very safe hands.”

The participating university teams and their submarines were:

“We were delighted to be able to organise this event for a third time, ” says David Loosley, Chief Executive of IMarEST. “The engineering aptitude, determination and enthusiasm of the students was truly outstanding. I’d like to thank the marvellous team at QinetiQ for hosting the races and supporting us throughout as a principal sponsor. I’d also like to thank our other sponsoring organisations – DE&S, Babcock Group, BMT Defence, and BAE Systems – for making the races possible and providing speakers for our Masterclasses and Careers Fair. Thank you to the team at Hilsea Lido for hosting our Careers Fair; to Senior Rates Mess, Fort Blockhouse for hosting the final dinner; to the team of Army divers who provided safety support; to our judges led by Vice Admiral Sir Robert Hill; to William Megill and Frank Mungo for their tireless efforts in making this event the huge success that it was and to all the teams for making the trip here and awing us with their abilities, zeal and creativity!”

Long list of prizes
The eISR ended with a dinner in the Senior Rates Mess, Fort Blockhouse for the presentation ceremony.

About the European International Submarine Races

The eISR is an initiative of the IMarEST which challenges teams of university students to design, build and race human-powered submarines against the clock on an out-and-back course. The concept combines engineering design challenge with technical skill development and sets them in a unique and exciting sporting competition.

The basic rules of the sport are straightforward – teams must design, build and race flooded submarines piloted by a single scuba diver, who must be fully enclosed within the hull of the machine. All propulsion power must be provided by the diver during the race (i.e. no energy storage devices such as flywheels or batteries are allowed), but otherwise the design rules are open to whatever innovation teams decide to use.

The eISR is also about developing real, practical engineering skills. In the funding-constrained university environment, the practical elements of curricula have been replaced with theoretical calculation and computer modelling. A submarine big enough to contain a diver is a real, tangible machine, and the mechanisms have to produce and take real forces. At the same time, the challenge isn’t so great that the students can’t make the parts themselves – this provides an invaluable learning experience as they see their CAD drawings come to real life.

Finally, the competition is about working as a team in a time-critical, adrenaline-charged atmosphere. During the build-up to the race, the students learn to exploit each other’s’ strengths, and design into their machines what they think they will need to succeed at the races. In initial testing, they learn where the weaknesses are, and make considered adjustments to their designs. Then, once they arrive on the racecourse, and really put their machines to the test, they invariably find new challenges, and have to bring out their engineering knowledge to find solutions on-the-fly with limited facilities. Such experience is invaluable to them later in their careers, regardless of the direction they take.

For more information on the race or sponsorship, please email marketing@imarest.org

The IMarEST is an international membership body and learned society that brings marine engineers, scientists and technologists together into one professional body. The largest marine organisation of its kind, it spans 128 countries and works to promote the scientific development of marine disciplines, providing opportunities for the exchange of ideas and practices and upholding the status, standards and expertise of marine professionals worldwide.

Members are able to gain professional registration (such as Technician, Incorporated, Registered or Chartered status). Education is supported through the MLA, a subsidiary of the IMarEST Group that delivers distance e-learning.

The IMarEST is an NGO with consultative status at the International Maritime Organization (IMO), observer status at the Intergovernmental Oceanographic Commission, International Hydrographic Organization, the London Convention/London Protocol (LC/LP) and the Joint Group of Experts on the Scientific Aspects of Marine Environmental Protection (GESAMP) and it has special consultative status with the Economic and Social Council of the United Nations (ECOSOC).