Exmar provisional results for the first half of 2016 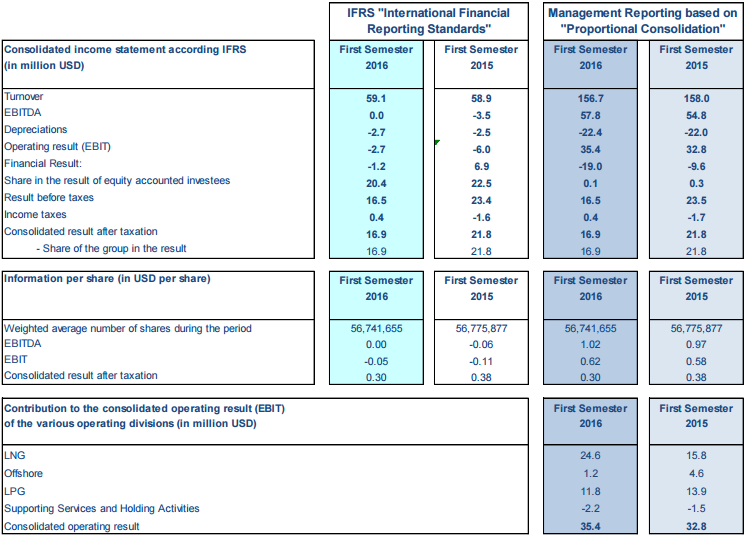 All figures have been prepared under IFRS and have not been reviewed by the statutory auditor.

The operating result (EBIT) was USD 24.6 million for the first half 2016 (compared to USD 15.8 million for the
first half 2015). This figure includes a payment of part of the termination fee payable by PACIFIC EXPLORATION
and PRODUCTION as well as costs related to the commissioning of Caribbean FLNG. The balance of the
termination payment continues to be received on a monthly basis until June 2017.

All Floating Storage and Regasification Units (FSRU) and LNG carriers (with the exception of the EXCEL) remain
committed to long-term charter, and are therefore not directly impacted by the rate fluctuations on the
worldwide market. EXCEL is currently employed on the spot market and continues to benefit from the
minimum revenue undertaking.

The commissioning of the Caribbean FLNG has started on 14th June 2016. Delivery is expected in the third
quarter 2016 once the unit has been successfully performance-tested at the shipyard. Several employment
opportunities for the unit are currently under active discussions.

The FSRU under construction at Wison is progressing as planned and the unit is expected to be delivered by mid-
2017. EXMAR is in several negotiations for long-term employment of the unit.

EXMAR is continuing to pursue a number of projects around the World based on its OPTI® production
semisubmersible design. Due to the current energy prices decisions to award contracts for these projects have
been delayed until the second half of 2016. The efficient design of the OPTI® semisubmersible platform
continues to be a model for a low cost deepwater Oil and Gas production solution.

The accommodation barges WARIBOKO and NUNCE are operating in West Africa under their respective
contracts and will be fully employed for the balance of 2016. The contract of the KISSAMA has been extended
until end of October. 60% of the WARIBOKO has been sold to our Nigerian partner under a purchase option
mechanism at the end of May 2016.

The engineering services of EXMAR OFFSHORE (Houston) have been affected by a reduced activity level during
the first semester. This activity is however expected to gradually pick up in the coming months

The average Baltic VLGC Freight Index edged further down during the second quarter which resulted in a
noteworthy correction on the Time-Charter Equivalent for a modern VLGC. There are signs that freight rates
may have bottomed out for the moment.

EXMAR-controlled BW Tokyo (83,000m³) has been redelivered from her charterer and is operated on the spot
market. Active discussions have been engaged for long term commitments.

MGC (Midsize Gas Carriers)
Facing more competition from the larger segments (VLGC/LGC) especially during the past few months, earnings
for spot and short-term commitments for MGC have remained under pressure. However, in terms of activity,
the few available ships have managed to secure commitments thanks to increased ammonia trading
requirements.

EXMAR’s‎contract portfolio remains substantial for the balance of the year with in excess of 80% employment
secured. Looking at forward open positions, EXMAR is currently actively pursuing a series of term-cover
opportunities.

EXMAR took delivery of KONTICH from Hanjin Heavy Industries in July. She is the second scrubber-equipped
vessel in the fleet and will be positioned to Northwest Europe where she is to support‎ Statoil’s‎ LPG‎ trading‎
needs on the basis of long-term Time Charter.

The financing of the last four vessels under construction at Hanjin Heavy Industries has been committed and
documentation is currently progressing for an execution in the third quarter of 2016.

Apart from a few signs of more market optimism, overall trading activity in Europe remained fairly quiet. No
fundamental changes were observed in the East with currently only a handful of traders influencing the
market. In view of the very modest orderbook and more decommissioning of older units, freight rates are
believed‎to‎gradually‎increase‎going‎forward.‎EXMAR’s‎Pressurized‎fleet‎is‎entirely‎covered‎on‎Time-Charter at
this present time and cover for the balance of 2016 stands at 85%.

The contribution of the Services activities (EXMAR SHIPMANAGEMENT, BELGIBO, TRAVEL PLUS) to the operating
result (EBIT) for the first half of 2016 was USD 0.6 million (compared to USD 1.7 million in 2015 for the same
period).