The return of the Radial medallists

China’s Lijia Xu, The Netherlands’ Marit Bouwmeester and Belgium’s Evi Van Acker, medallists from London 2012, will make their Olympic return in the One Person Dinghy (Laser Radial) at the Rio 2016 Olympic Games.

The trio were locked in a thrilling winner take all Medal Race battle at the London 2012 Olympic Games with Annalise Murphy (IRL) missing out on the podium in Weymouth and Portland, Great Britain.

LEARN about the history, technicality and famous faces of the Laser Radial

Four years on and Xu returns to defend her crown, Bouwmeester and Van Acker will be aiming to go one and two spots up whereas Murphy will be wanting to vanquish the demons from London 2012.

WATCH the Laser Radial on the water

The Chinese racer initially stepped away from the sport after London 2012 but the lure was too strong as she made a return to Olympic sailing at the end of 2015.

“Of course the goal is to get another medal,” explained Xu, “but realistically it’s a very short time, only one year, to prepare. 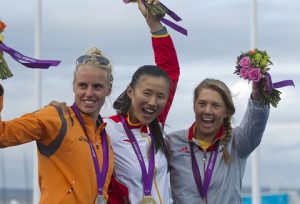 “I decided to retire because of so many injuries. I suffered quite a lot and I wanted to have a healthy body to live the rest of my life with, rather than having pain here and there. Last August I suddenly felt that the Olympics was still something that fired me up. After two years break I actually felt my body was recovering much better than before so I thought why not give it another try.”

Xu has secured some steady results since making her return with a silver medal at the 2016 Sailing World Cup Weymouth and Portland regatta the highlight. Whatever her result at the Rio 2016 Olympic Games is, the picture is much broader for Xu, “The Olympics is just part of the goal and I want to lead an active life forever and leave a legacy for Chinese sailing. That’s the ultimate goal I’m seeking and the Olympics is just a part of it.

“I think I am one of the few who is doing something I truly love and enjoy doing. Of course, in terms of Olympic sailing and the Olympic circuit it takes a lot of effort and you need to be prepared to make some sacrifices like being away from home, travelling a lot and spending thousands of hours in the gym and on the water.

“So long as you find something that interests you it will motivate you to keep going, no matter what lies ahead. I feel very lucky to find sailing as not just my hobby but as my career.” 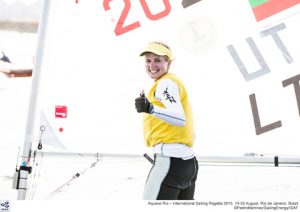 As for the form guide, Bouwmeester and Van Acker have dominated the Laser Radial over the Olympic quadrennial. The Dutch and Belgian racers have featured regularly on World Championship, European Championship, Sailing World Cup and Olympic Test Event podiums. They will both be major contenders in Rio.

Building up to the 2016 Games, the World Championship titles have been shared four ways. Tina Mihelic of Croatia took the title in 2013, Bouwmeester snapped it up in 2014 followed by Anne Marie Rindom (DEN) in 2015 and Alison Young (GBR) in 2016. Mihelic, Rindom and Young have the Olympic experience under their belts as well so know what it takes to perform.

Away from the World Championships, Lithuania’s Gintare Scheidt, Beijing 2008 silver medallist and wife of Brazilian sailing legend Robert, claimed gold at the 2015 Olympic Test Event. Scheidt will be making her third Olympic appearance and will also have the honour of carrying her nations flag at the Opening Ceremony on 5 August.

Much like the Men’s One Person Dinghy (Laser), the Laser Radial will feature some of the tightest, tactical racing at Rio 2016 and any sailor on any given day could come up with a performance of a lifetime to seal the deal.

Racing will commence at 13:10 local time on Monday 8 August on the Escola Naval racing area.