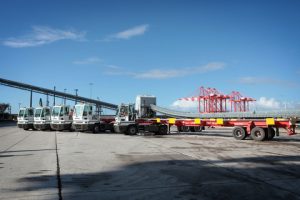 The fleet of YT222 tractors and Seacom 70 tonne trailers

Thirty-three new tractor units and trailers have arrived at the Port of Liverpool to serve its existing Royal Seaforth Container Terminal and the new Liverpool2 development.

The fleet of YT222 tractors and Seacom 70 tonne trailers represents an investment of more than £2.6 million in container handling equipment and will complement the new semi-automated CRMG cranes for L2 that are currently being commissioned.

Supplied by Terberg and its partner Briggs Equipment, the vehicles will initially focus on integrated operations between the two Liverpool terminals throughout the phased opening of L2.

Colin Darroch, Head of Container Operations, said: “It’s very important that we maximise efficiency throughout the port and its two terminals. After looking across the market we decided on Terberg’s vehicles as meeting our exacting performance and reliability specifications for the job as well as being cost-effective. We will also be introducing segregated lanes for the tractors and hauliers to further improve traffic flows.”

Richard Woodings, Head of Sales, UK and Ireland at Terberg added: “Having worked with Peel Ports for 20 years we are delighted that they have chosen to continue using our vehicles as they enter this new chapter.”

An extensive training programme has been put in place, providing additional opportunities for straddle-carrier drivers as well as new recruits.

It is expected that the port will take an additional 15 tractors and trailers as throughput at L2 increases.

About Peel Ports and the Peel Group

Peel Ports is one of the UK’s largest port groups, owning and operating seven of the UK and Ireland’s most important ports. It handles 70 million tonnes of cargo every year. It is headquartered in Liverpool and employs around 1200 staff. Peel Ports is part of the Peel Group, one of the UK’s foremost privately-owned investment enterprises. Our strategy embraces a broad range of sectors – land and property; transport and logistics; retail and leisure; energy and media, with assets owned or under management of more than £5 billion. Group investment policy is focused on actively managing our diverse portfolio, enhancing the quality of our assets and recycling capital over the long-term.

Permanent magnets: may the force be with you