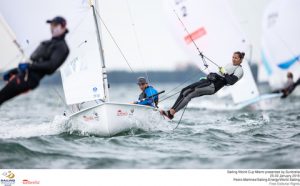 The Women’s Two-Person Dinghy (470) fleet at Rio 2016 will be a wide open game and a number of teams will start racing on 10 August believing they have what it takes to succeed.

Over the four-year quadrennial, no team has truly dominated with ups and downs aplenty. The Rio 2016 Olympic Games fleet will welcome back a number of key contenders, each one focused and with the understanding of what it takes to triumph.

Jo Aleh and Polly Powrie of New Zealand started the Rio 2016 cycle much like they left off after London 2012, winning and succeeding at the highest level. The pair famously overcame Hannah Mills and Saskia Clark (GBR) in a winner take all Women’s 470 Medal Race at the last Olympic Games and less than one year laterthey claimed the world title in La Rochelle, France. 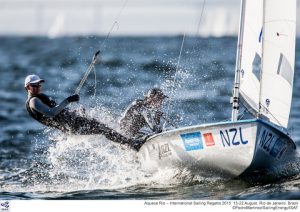 Aleh and Powrie backed it up with a gold medal at the first Olympic Test Event but from thereon in, missed out the top spot of a podium at the next three worlds and 2015 Olympic Test Event. The medals still flowed but the desire to win and standards within the Kiwi camp are high, “It’s been an interesting four years, we have had some good times, and some rather hard times, but we feel we are where we need to be for this next challenge,” said Powrie.

“Our overall aim for these last four years is simply that when we start our first day of racing on the 10th of August, we feel that we have covered all the basics, the equipment, the techniques, the strategy, the tactics, the venue, and then it’s just up to us to make the right decisions on each day of racing, each manoeuvre, every start, every leg.

“We are ready to take what comes, and give it our best shot. To sail each race as best as we can, enjoy the craziness that is the Olympic Games, and let the results be what they will be.”

London 2012 was the Kiwis first Olympic outing together. Aleh had previously sailed at Beijing 2008 in the Laser Radial but Powrie was making her debut. With an Olympic gold and experience behind her, the tension is off for Powrie, “We’re a bit more relaxed because we know a little bit more about what to expect and what we’re going to experience. For us, we just see it as another challenge, a new challenge.”

Experience is key at an Olympic Games. Understanding how dining, accommodation, transport systems, media requirements and logistics behind the movement can be a daunting task for any athlete. 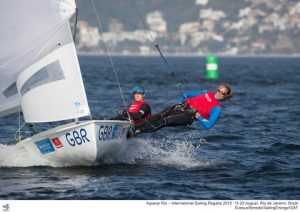 Much like the Kiwis, Mills and Clark of Great Britain are older and wiser after the four-year cycle. Having narrowly lost out on gold to Aleh and Powrie at London 2012 they have spent four-years preparing for their next shot.

“I’m a very different person to who I was four years ago,” expressed Mills. “I was inexperienced, I’d never been to an Olympics, I’d never seen an Olympics in real life. I wasn’t at that stage probably in a particularly great place to win an Olympic gold medal. Today I have grown up a lot, I’ve matured a lot, I see the world differently, I see life differently and I think I’m ready to take on my personal expectations and everybody else’s and just know how to deal with it a bit better.

“In hindsight it came to down to inexperience of the occasion, of the preparation for that,” said Mills. “We made one mistake essentially off the start line and that was it. Sport’s like that, it’s brutal at times. Halfway through the race, we knew it was over. We were getting the silver medal, which was obviously incredible and to win a silver medal at a home Games or any Games is amazing, but I think when you’ve already won that going into a race, you feel more like you’ve lost the gold medal as opposed to won the silver medal.” 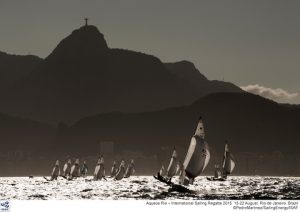 470 Women racing under Christ the Redeemer

Mills and Clark will be back to attempt to right their wrongs but over the Olympic quadrennial one team has shone brightly.

Austria’s Lara Vadlau and Jolanta Ogar have won two world titles, finished on the podium at two more and hold two European titles. Vadlau was the youngest sailor in the Women’s 470 at London 2012 and the talent has truly emerged since then and at 22-years-old, she’ll once again be one of the youngest.

At the 2015 Olympic Test the Austrian pair finished off the podium but with weeks and months of training in Rio de Janeiro, they feel prepared for the challenge.

“Guanabara Bay is a giant body of water and well known for its contrasting topography,” they explained, “smooth features such hills or plains are in abrupt contrast with high mountains and steep hills. These features have a strong impact on both wind and current flows. It is a big challenge to understand the systems and it was pretty hard work to get the right feelings. All in all, we are very well prepared and happy, that the games will start now.”

“Our goal is to win a medal, after the last three years it wouldn´t be serious to say something different.”

As for their rivals, “We know that the battle for the medals will be very tough. New Zealand, Great Britain, France, the Americans and a few more teams can also realize their dreams. We expect a dramatic and very close racing and trust in our skills.”

France’s Camille Lecointre and Helene Defrance and USA’s Annie Haeger and Briana Provancha have also enjoyed recent success. The French pair won gold at the 2016 World Championships and the Americans were victorious on Olympic waters at the 2015 Test Event.

Women’s 470 racing starts on Wednesday 10 August at 13:10 on the Escola Naval racing area