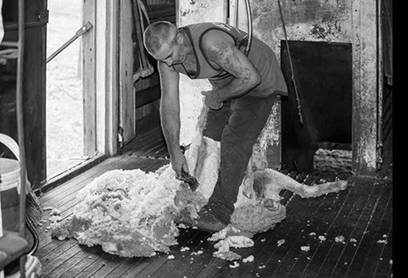 Sheep breeding and shearing, in representational form, is coming to the Greek capital for a month.

International photographer Shane Aurousseau is preparing an original exhibition which will be on show from September 15 to October 15 2016 at the Ianos Café, a top cultural meeting spot in Athens (at 24 Stadiou Street, a short distance from Panepistimio metro station).

His images will celebrate sheep farming and its place in Australian literature. Shane is long versed in the ways of pastoralism: his family had a sheep station in outback New South Wales.

Shane says that his show will take visitors on “a photographic journey through the sheep breeding region of Condobolin, Central New South Wales, and the vast rural areas of Australia” where his lens recorded the hard work (in Australian argot, “hard yakka”) of shearers gathering wool from the renowned Merino breed.

There is a fascinating story about how rearing Merino sheep came to lay the foundation for the success of the big country’s wool industry. The masters of two Australian ships that called at Cape Town in 1796 for supplies found that a flock of 20 Merinos was for sale. Captains Kent and Waterhouse paid for the animals, and took them back to Australia to sell them to land holders, notably the great pastoralist Capt John Macarthur. Introducing this variety led to a huge increase in the wool clip, the merino became the dominant breed, and Australia for many years was the leading producer of wool.

Shane focuses on Condobolin on the Lachlan River as the setting for the poem Clancy of the Overflow by Banjo Paterson, which is about a shearer named Thomas Clancy at a The Overflow sheep station. It is one of the most important works in Australian literature. Banjo Paterson (1864-1941) grew up on an outback farm, and qualified in Sydney as a solicitor, starting to write under the pseudonym The Banjo which was the name of his favourite horse.

Paterson had needed to contact by mail Clancy, whose last known address was a particular station, and received a reply by letter “(and I think the same was written with a thumb-nail dipped in tar, ‘Twas his shearing mate who wrote it, and verbatim I will quote it: ‘Clancy’s gone to Queensland droving, and we don’t know where he are.’” 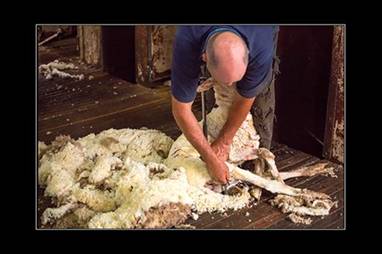 In the woolshed: photo by Shane Aurousseau.

Shane Aurousseau currently lives in London, and his overarching photographic theme can be described as the diversity of society, ranging from deprived neighborhoods of large cities to landscapes and life in remote, rural areas of Australia. His images of London have been used on posters and postcards. One of his exhibitions, in Madrid, was sponsored by the American Women’s Association.

Previously, he has worked as a creative director and photographer in some of the largest advertising agencies, in Sydney, Amsterdam and London and for clients including Time Magazine, Time Life Books, Michelin, Chrysler, the Automobile Association, and for banking and investment funds.

The Athens exhibition is sponsored by Canadian investment company Syracuse Main Inc and Innova Fine Art paper, and supported by the Australian Embassy in Athens.

Its opening evening at Ianos Café on September 15 will be enlivened by music from a jazz quartet.

The café is described by its directors as “one of the most innovative and successful businesses in the Greek book and culture industry. Its aim is to promote interaction and meaningful communication between authors, artists and those interested in culture.

“Our vision is to create and promote culture, while linking people with works of art and their creators on a daily basis.” Ianos Publications, founded in the early 1980s by Nikos Karatzas, initially focused on Thessaloniki and its authors, going on to expand its scope substantially, with six branches.  Over the years, says the company, it has hosted more than 5,000 events, and has an online cultural radio station and a digital television channel.

Since late 2015, Shane Aurousseau has had an exhibition of his limited edition prints, curated by Outwalls, at Leyas coffee house in Camden High Street, London NW1, a few paces from Mornington Crescent tube station.

IMCA’s Asia-Pacific section meeting to be held in Bangkok