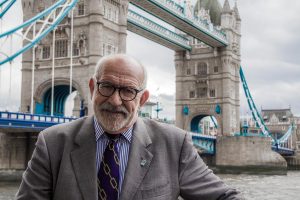 Introducing yourself should be easy given the Know Thyself interpretation. The video that follows tells you, more or less, all about my forthcoming book and given the noise of bustling boats and people at Tower Hill, off the Tower Bridge, at the bank of River Thames, I though to produce a written script so you don’t miss anything:

Good afternoon, Good Morning or even good evening – depending on the time zones for all our viewers on Planet Ocean.

This is John Faraclas on the banks of Father Thames just off the Tower of London, part of the Square Mile; the river with the most momentous history in the development of the international shipping saga over many millennia!

Today I am pleased and honoured and may I say fortunate to announce my forthcoming book, my autobiography. The “Black Sea Manoeuvres” as I call it stems from the fact that for over 300 years a section, a part of my family was settled by the Black Sea and in particular the Sea of Azov – which today is at the forefront of news given what is taking place between Russia and Ukraine. They were undone by the Bolsheviks’ Revolution…. It is coincidentally in that area that my life’s troubles began…

My family emanate from the Greek island of Chios and in my book I have to …compete with Homer, who is claimed to be from there – six other Hellenic places argue that he’s theirs. There will be covered in this autobiography a lot of places around the globe some being very exotic and special “where my troubles seem so far away,” to paraphrase the Beatles song!

Everything you want to know about shipping will be in detail there, supported by nearly one thousand pictures – a unique testimony of what will make many even lose their sleep. Originally I have envisaged 17,000 pictures, but… It will be far, far beyond what you might have seen on the small box and or on the big screen about shipping dynasties, the intrigues, the births and the berthings…, marriages and divorces – business divorces too, as in allaboutshipping.co.uk  .  There will be also a hard copy published by Faraclas Times Two Maritime Media and same will be offered half price to all those who have viewed the story electronically.

Hopefully in 2018 you will be able to read these accounts twice a day in direct continuation. We are looking for 64 chapters in 800 pages! Then there will be a film too; hold your breath! After all this, you will see why I am so spoiled vis-a-vis tackling the issues and giving my opinion on everything that has to do with shipping!