Reviewing contracts for supplying fuel oil and for off hire provisions 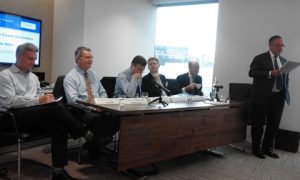 The OW Bunkers case has been described by Lloyd’s List as “the most spectacular legal imbroglio so far this century.”  The discussion focused on the “true effect of a contract for the supply of fuel oil,” where the suppliers of bunkers to the Res Cogitans, OW Bunkers, had gone into liquidation. Their rights to payment under the contract had been assigned to their bankers, ING, who were seeking to recover their losses arising from the collapse.

OW Bunkers’ terms of contract included an assignment of the right to payment to ING and incorporated a retention of title clause, so that title would not pass until the bank had been paid in full. However, the bunkers could still be consumed on delivery and prior to payment. The bunkers had not been physically supplied by OW Bunkers but by a subsidiary of Rosneft and was subject to their standard terms which included a retention of title clause.

The transaction was one of many entered into by OW Bunkers, and various shipowners were facing multiple claims from ING and the physical bunker suppliers for payment of fuel supplied to their ships prior to the OW Bunkers collapse. Cases were pending in a number of jurisdictions and the decision of the Supreme Court was therefore of considerable importance to the shipping industry.

Robert Bright QC of 7KBW provided what he described as an insider’s guide to the Res Cogitans decision.  The shipowners had not sought to interplead, which would have been the orthodox approach, but had taken the stance that they owed neither ING nor Rosneft.  They maintained they did not owe ING because OW Bunkers had never paid Rosneft for the bunkers and were never in a position to transfer property and title.   Moreover, they were in breach of section12 of the Sale of Goods Act, by which they had no right to sell the goods at the time when property was to pass.

They maintained they did not owe Rosneft since their claim did not amount to a maritime lien and they had no contract with them. Owners’ only contract was with OW Bunkers and Rosneft had no claim in tort (for conversion) and no claim for unjust enrichment.  Therefore, Rosneft had no discernible claim  under English law.

LMAA Arbitrator Trevor Harrison outlined the bunker industry’s impressions and concerns arising from Res Cogitans, particularly the position of OW Bunkers. He highlighted the growing importance of Asian bunker markets and the “endless permutations” in the structure of bunker contracts. He felt Res Cogitans still mattered in English law but this would not be the case globally with future bunkers contracts. He concluded that shipowners were “in for a rough ride.”

Examining the aftermath, particularly the financial aspects, John Kimbell QC of Quadrant Chambers reviewed the position of ING in attempting to reclaim its debts in the light of the Supreme Court decision in their favour. That decision was largely based on the finding that, on the construction of the contract, OW Bunkers was not contracting to transfer title but to procure the necessary permission from Rosneft, as owner of the bunkers, for the bunkers to be consumed.

Accordingly, the Sale of Goods Act had no application and ING were entitled to payment since there had been no breach by OW Bunkers in their contract with the owners. He considered that ING’s pursuit of summary awards in other London arbitration proceedings, commenced under OW’s standard terms and conditions, would be positively affected.

Daniel Bovensiepen of 20 Essex Street considered the vessel’s arrest and the various decisions re parties adjudged at fault in the Commercial Court, the Court of Appeal and the Supreme Court—-and their ramifications..

A key question arising from the Global Santosh case concerned the shipping industry’s perception of the division of risk for arrests, where arrests of vessels under time charter are concerned. Would any loss of time due to arrest or detention resulting from matters for which owners were responsible rest with them and vice versa for the charterers. The essential elements were covered by Simon Rainey QC of Quadrant Chambers. He summarised the “business common sense approach, the majority and dissenting views from the Court of Appeal judges and various other off-hire arrest cases. He maintained that the specific wording of the particular clause defined the parties’ entitlement and not any over-riding commercial construction or business common sense.

The seminar was chaired by the Hon. Sir Bernard Eder and hosted by Squire Patton Boggs at their London offices before an audience of over 100.

HARRIS PYE to the rescue for damaged hull repair