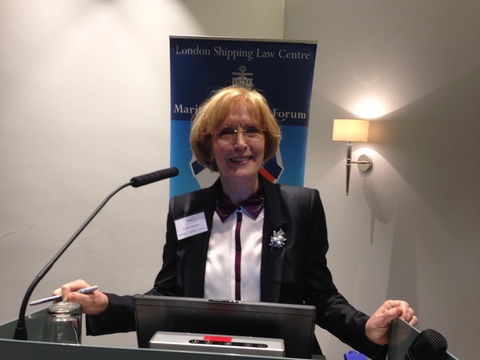 The London Shipping Law Centre (LSLC) has underlined its primary aim of bringing together maritime industry representatives  by hosting a networking dinner and drinks reception at this year’s prestigious Cadwallader Debate.

This biennial event, organised by the LSLC, will be held on 26 October at Drapers’ Hall and will be attended by over 250 delegates from across ship owning, ship management, insurance, law, class and regulatory sectors.

This year’s event will discuss the topic, Master Under Attack – Authority And Responsibility In An Age Of Instant Access.

The panel will discuss the legal position of the ship’s Master when tackling the day-to-day pressures of today’s shipping industry and will suggest possible solutions. Problems include erosion of the Master’s authority; the powerful positions of charterers; bullying and harassment by authorities in the port; and the demands of modern technology.

Guests will be welcomed from 5.30pm with a drinks reception, providing networking opportunities.

The Debate will then begin with the first speaker Kuba Szymanski, Secretary General of Inter-Manager.

He will be followed by the other four speakers Michael Kelleher, Director, West of England P&I Club; Faz Peermohamed, Partner and Global Head of Shipping at Ince & Co;  Michael Chalos, Partner at K&L Gates (New York); and Jeff Lantz, Director of Commercial Regulations and Standards at the US Coast Guard.

Delegates will have the chance to ask the speakers questions in a short question and answer session, and the Debate will be concluded by 8pm.

This will be followed by a dinner and a further chance to network over drinks with the bar opening at 10pm.

For more information about the debate and how to get tickets, please contact Gerard Matthews on +44 (0) 20 7936 3417 or by email: Shipping@ShippingLBC.co.uk