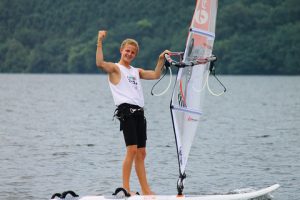 The road to the Buenos Aires 2018 Youth Olympic Games (YOG) will be a global adventure for the best young speedsters with a continental qualification system deciding which nations will send sailors to Argentina in October 2018.

Exactly 100 sailors aged 15-18 will sail across five events on Mar del Plata from 1-12 October 2018 and an injection of pace has been added to the Buenos Aires 2018 YOG Sailing Competition with thrills and spills expected.

Getting to YOG is an achievement in itself as sailors have to earn the right and qualify their country at key international regattas.

Sailors will have two opportunities to qualify during the qualification period of 1 April 2017 to 23 June 2018. The first chance for all will be at the Class World Championships with the second coming at a sailors’ continental qualification event.

In total, there will be places for 88 sailors through the qualification system with the host country automatically qualifying six athletes, one in each boat. Six further Universality Places will be made available to eligible National Olympic Committees.

World Sailing Director of Events, Alastair Fox commented, “The Buenos Aires 2018 YOG is going to be a spectacular demonstration of fast paced sailing in a dynamic youthful arena. YOG provides sailors with an inspiring experience as well as offering insight into the Olympic arena. Several sailors from past editions, Singapore 2010 and Nanjing 2014, competed at the Rio 2016 Olympic Games and we hope to see further Yoggers at Tokyo 2020 and beyond.”

Singapore and Nanjing played host to memorable competitions in 2010 and 2014 and many continued their adventure through to the Rio 2016 Olympic Games.

Singapore 2010 gold medallist Lara Vadlau (AUT) went on to qualify for London 2012 before winning back to back Women’s 470 world titles in 2014 and 2015. Vadlau sailed at Rio 2016, finishing in the top ten of the Women’s 470 and was joined by a longlist of 2010 YOG athletes at Rio 2016, including Sebastien Schneiter of the Swiss Sailing Team, Cheng Chun Leung (HKG), Audrey Yong (SGP) and Stephanie Devaux Lovell (LCA), to name but a few.

Ecoslops: H1 activity backs the business plan and the technology…