Trezoros: The Lost Jews of Kastoria 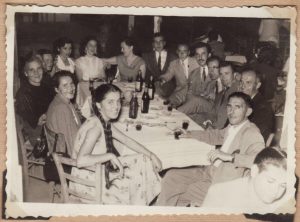 Strolling through Kastoria, a tranquil city of northern Greece perched on an isthmus by a lake teeming with fish and blessed with grand mountain scenery, you would never suspect the suffering it witnessed in the major social cataclysm of the 20th century.

The hidden story is told in a sensitive but unsettling new film, Trezoros: The Lost Jews of Kastoria, which has just had its world premiere in London. For the directors Lawrence Russo and Larry Confino, who are cousins and whose forefathers were Kastoriani, this was more than a family project. Releasing precious oral history narrated by a small group of people, the superbly crafted documentary tells of the suffering of one town, but calls forth the universal quality of community resilience in the face of horrendous odds.

The directors seamlessly and without artifice combine interviews with highly personable men and women of the Sephardic community which was in the 1930s a substantial presence in Kastoria, a stronghold of the Greek Orthodox Church but where Jews and Christians lived in harmony for hundreds of years. The Jewish populace of Kastoria dating from the times of the Roman empire, were to be all but wiped out by the Holocaust.

Compared with the tragedies that hit their co-religionists in much of Europe, the fate of Greek Jews is inadequately known. This film graphically puts that right as far as Kastoria is concerned. On a larger scale, Thessaloniki had 50,000 Jews before World War II and was known as the Jerusalem of Greece.  Today there are only about 600 of the faith living in Greece’s second city.

Trezoros, a 93-minute movie which takes its title from a Ladino and Judeo-Spanish term of endearment meaning ‘treasures’ unfussily presents the gripping history as seen by surviving Kastorianis, interviewed on location in the city of the title, and in Thessaloniki, Athens, Israel, Miami, Los Angeles and New York. Every sentence is heavy with import – not a syllable superfluous. The directors dug out archival material including fearful footage of Benito Mussolini, and remarkable home movies of the time to depict the customs and beliefs that animated the many Jewish settlements of Greece.

The first Jews to settle in the north of the country were known as Romaniote, supposedly slaves from a ship which had berthed at a Greek port. They were joined at the time of the Inquisition by Sephardic Jews who fled Spain, and in the 17th and 18th centuries others arrived via Italy, accounting for Italian surnames, and these influxes overwhelmed the Romaniote element. The settlers’ Ladino tongue, which is close to Spanish, later meant that when Kastorianis were transported to Nazi concentration camps, prisoners who spoke Yiddish at first doubted that they were Jewish. 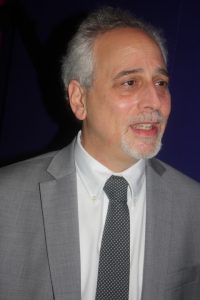 Larry Russo’s mother Lena Elias Russo, who at the age of 94 is in excellent health despite her ordeals and near-death experiences early in life, narrates much of the story.  She was 90 at the time of the filmed interview and, elegant and eloquent, recalls how the Western Macedonian city, noted for its Byzantine churches, had excellent inter-communal relations.

“We were very happy as young people,” she says. Before the war, there were close to 1,000 Jews in two districts of Kastoria, and there was much socialising with other residents. When the lake froze it was hard enough for horses to be ridden over it, and there are photos of people frolicking on the ice and skating. There were no radios, and many people could not afford or read newspapers, so a large Jewish man with a strong voice, Benjamin Honen, boomed out the news from one nameless street to the next, as the town crier. Every Monday there was a market attracting farmers from all around. In autumn, fruit and vegetables were pickled for winter.

Girls were expected to do nothing but dust the furniture and carry out other household tasks, ready to marry and have children.

There were two main occupations: furriers and fishermen. It is believed that the name of the city, Kastoria, may derive from the Greek word for beaver, a species which was the foundation of the fur trade, although later becoming extinct and replaced by mink as a source of fur. 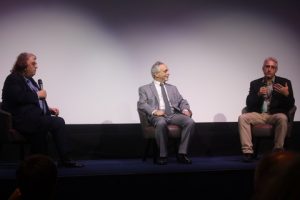 We are told in the film that most of the Jews were “not furriers, they were serving the furriers” and were in the clothing business. They were selling furs, and Confino’s shop was the biggest and “best store in Kastoria,” selling fabrics. There was a hardware store, shoemakers and bakers and a big flour mill owned by Lena’s father Calef, chairman of the Jewish community. “We are like one family with the Jewish people,” says an elderly Christian former neighbour on camera.

In October 1940 Kastoria’s peaceful existence was shattered by the Axis forces invading Greece. The Italians invaded Greece from occupied Albania, but the Greeks pushed back and took control of part of Albania, leading Germany to declare war on Greece. In April 1941 the Germans assaulted Kastoria, trying five times to cross a bridge into the town but were repelled by Greek infantry. Eventually the defenders suffered many casualties from Stuka bombing, and Kastoria had to surrender.

The Nazis boasted of conquering Thessaloniki in four and a half days, and on April 27 1941 the Germans entered Athens. They divided control of Greece between the Italians who were assisted by the Nazis, and the Bulgarians. Kastoria was in an Italian zone and in some ways life continued peacefully. “The Italians never hated the Jews,” says one inhabitant. The Italians were “constantly pushed aside by the Germans,” though and cracked down on anyone suspected of helping the partisans. They used to kill partisans in front of the cemetery in the afternoons, as local children hidden in the bushes watched wide-eyed.

Starvation was rife but the population was saved by the lake which had lots of fish, and sold the fish to neighbouring settlements in exchange for other foodstuffs. While the Italians did not generally maltreat the residents, after Mussolini was toppled the Nazis with their brutal code of behaviour muscled in. 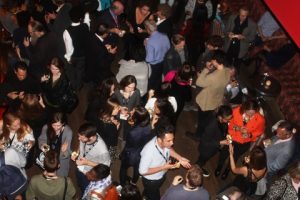 In 1943, the Germans segregated the Jews, forcing them to wear the yellow star. On March 23 1944 the town was hit by an unusual snow fall. The snow was black and 2ft deep, an omen to the Jews that persecution would soon follow.

Some thought that the black colour was from the smoke of wood-burning stoves, but it was more likely to have been caused by ash from an eruption five days earlier of Vesuvius, 500 miles to the west. Two days later, Germans accompanied by Greek police rounded up all the Jews they could find – some of them having already been confined in a large building known as Valala – and packed them cruelly into trucks for onward train transport to the notorious Auschwitz-Birkenau concentration camp. A figure of close to 1,000 people dispatched to Poland is mentioned in the film, although historians have put the exact figure at 763.

Kastoria was liberated by the Greek People’s Liberation Army just under four months later, but too late. By the end of the global conflict, only 35 of the original Jewish population remained.

Several of the Russo family perished in Auschwitz or other hell-holes, and Lena’s father Calef, who had been a pillar of the Jewish community, died on a forced march from Auschwitz to Bergen-Belsen, the biggest internment complex in Germany. Lena was forced to work in various camps, and appears to have survived only because her singing entertained the Germans. Like many thousands of others, Lena and her brother Beni were reduced to near-skeletons but their spirit kept them going until Liberation.

Full of praise for their American liberators, Lena emigrated to New York where she along with other Greeks worked in a textile factory.

Lena was invited back to Kastoria and sailed from the US with the then super-modern passenger liner Independence to Genoa, where she was met by a handsome former partisan, Maurice Russo, who was to accompany her back to her native town. He fell for her sparkling personality and good looks, and the two married in Thessalonki in 1953. Lena urged her brother Beni who was a member of the only Jewish family, of Jack Elias, still living in Kastoria: “You have to come to America.”

Maurice built a successful textile business in New York from nothing and went on to make good money from investing in real estate.  He died in 1988. Fortunately, the directors of the film recorded extensive interviews with Beni before he passed away in 2013. Sitting beside his sister Lena, the two and other members of their family are compelling, sympathetic and highly articulate narrators.

In a short address at the London premiere, Larry Russo said of those he interviewed over several years for the project: “Everybody has amazing stories, and heart-breaking stories.  The [Jewish and Christian] communities remember each other with affection – that is what we wanted to convey.” He agreed with Phillip Bergson of Fulfilment Agency, a leading film critic and broadcaster, who chaired the presentation, that we should not forget how that kind of mutual respect was possible in a European city.

The producers revealed that they had shown the film a short time ago to a group of Kastorianis and “they loved it. Most of the people in the audience did not know the story,” said Larry Russo. Larry Confino thinks that following the international conflict, the civil war that erupted around Kastoria and elsewhere pushed a desire to recall earlier history to the back of many minds.

The film-makers were shocked to find that Valala, a town building used to coral some of the Jews, still stood but in ruins. It is in a beautiful spot at the top of the peninsula. Mr Confino said he had heard the current owner wanted to build a supermarket there, but the plan was quashed by the local authorities, “so I think it is in a kind of limbo right now. It is very sad, because something should be done with [the building].”

Mr Russo grew up in New York and graduated from New York University’s Film & Business Schools in 1986. He has long been involved in independent film companies and production. Larry Confino’s grandfather came to the US in 1930, and spoke little of his roots.
The London premiere was at the modern 190-seat Ham Yard Theatre, part of Ham Yard Hotel, off Great Windmill Street, and the world premiere at Vue Piccadilly in Regent Street for the major Raindance festival of independent films.

What next for Trezoros? Attempts are underway to secure a wider distribution.  The film-makers are in discussion with US public television, and meanwhile it will be shown in New York in October, at the Australian Jewish Film Festival in Melbourne and Sydney the following month, and in Los Angeles in November.

For trailers and other information, please see www.trezoros.com