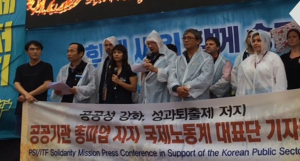 The 10-strong team was from the ITF and Public Services International (PSI) global union federations and representatives from their member unions – the CGT General Union of Civil Servants and CGT Cheminots (France); the Canadian Union of Public Employees (CUPE); the Rail Tram Bus Union of Australia (RTBU) and the Rail and Maritime Transport Union (RMTU) of New Zealand.

They were in Korea in response to a request for solidarityfrom Korean unions. The mission follows a top level ITF delegation that personally witnessed the targeting of trade unionists for speaking out. Just ahead of the visit Transport Workers’ Union of Australia (TWU) national assistant secretary, Michael Kaine, visited Korean truck drivers on the eve of their strike (See https://goo.gl/j0etIi).

The imposition of a discriminatory performance-related pay and termination system is part of a government attempt to further liberalise and privatise public services. The new system would have workers competing against each other and make it easier to dismiss employees. It would lower wages and undermine both job guarantees and the right of trade unions to defend their members.

The lawful strike brought together workers right across the public and public transport sectors. Its show of strength has led to some employers cancelling suspensions, but the government has declared the rail strike illegal and intends to press charges against nine rail union leaders. The global union movement will fight these attacks and campaign for rights in Korea and the release of those arrested in the last wave of anti-union repression.

Speaking in Seoul at the end of the mission, ITF assistant general secretary Stuart Howard said: “The ITF/PSI international mission has been present at the launching of a major workers’ struggle against a government determined to accelerate the process of neoliberalism and privatisation. Korean unions are on the front line of the fight against globalisation.

“The international union movement must mobilise to support what is now a pivotal struggle.”

ITF president Paddy Crumlin was in the court with ITF general secretary Steve Cotton and the previous ITF delegation in July, which witnessed the unjust sentencing of Cho Sung-deok, vice-president of the KPTU. In the public rally in front of the court house after that he promised that the global union movement would keep up an unremitting fight for democracy and rights in the country, including the call for the jailed KPTU officials to be released. Commenting on the latest news he stated that the ITF and its allies would support its affiliates throughout and oppose the introduction of privatisation and labour reforms that would undermine workers’ and citizens’ rights.

The executive committee of the ETF – the ITF’s European arm – has also passed a motion condemning the government’s violations of labour and human rights.

Read the ITF/PSI joint statement at the close of the visit here. Follow the story at www.facebook.com/ITFglobal and on Twitter using the hashtag #KoreaStrike4Justice. Videos from the mission can be seen here.