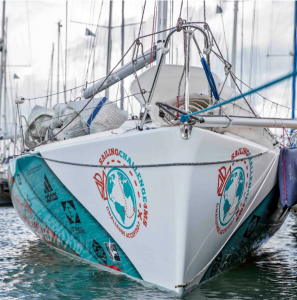 Nieuwpoort, Belgium, 3 October 2016 – GAC Pindar sponsored Ruben Donné has set off from Yacht Club VVW Nieuwpoort for Cape Town, via Brazil, to raise awareness and funds to find a cure for the progressive disease Multiple Sclerosis.

Multiple Sclerosis (MS) is a cause close to 28-year-old Ruben’s heart; his father has the condition. Since he launched his campaign at the Belgian Boat Show in February, Ruben has raised a staggering €31,000. GAC companies in Belgium, the Netherlands, the UK and South Africa are supporting the amazing feat and covering the logistical expenses.

Ruben says: “Although the voyage is of course a solo attempt, it’s the teamwork and communication behind it that’s made it possible. Both Ivo and Andrew have been with me all the way.”

Ivo Verheyen added: “It is a pleasure to be supporting such an incredible initiative for a worthy cause. It’s GAC’s job to be there for Ruben and #SailingChallenge4ms in every port he stops at, every step of the way. We’ll be liaising with port authorities, organizing fuel, supplies and any spare parts required and we’re looking forward to welcoming him to Cape Town around his ETA of December 15.”