06 Oct 2016 – Merchant shipping should continue to take protective measures against possible piracy attacks in the Gulf of Aden and the western Indian Ocean through diligent application of IMO guidance  and Best Management Practices (BMPs).

IMO Secretary-General Kitack Lim and Operation Commander Major General Rob Magowan of the EU Naval Force Operation Atalanta, which operates off the coast of Somalia, reiterated this key message when they met at IMO Headquarters in London today. 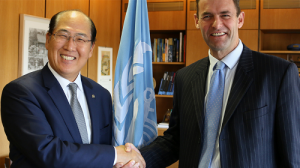 The two agreed that naval forces are still very much required in the West Indian Ocean to help prevent a possible resurgence of piracy and Mr Lim welcomed the extension of the Operation Atalanta counter-piracy mandate to the end of 2018. They further agreed on the need to secure the release of the seafarers still remaining in captivity in Somalia. (Photos)