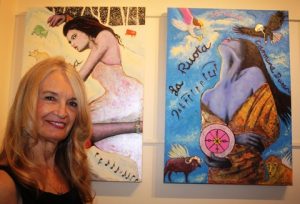 Her paintings pulse with the electrifying action and the sensational arias of the grand interpreters – and what a superb collection they make, in a solo show at the Piers Feetham Gallery in Chelsea.

Through rich, cosmic conceptions, she conveys the eternal subject matter by overlaying her own mood music on to the canvas. Drama and painting are linked in a distillation of plot and palette into burning sensuality.

This prolific and dedicated artist has on show a grand total of 55 works from the last four years including 22 drawings in pen and ink or pencil. The majority are acrylics with her trademark gold and silver leaf, or oils on canvas.

From the golden and silver ages of opera, heroes and heroines take lucid but sometimes haunted shape, often against an astrological background, in which the light touches of metallic leaf transform the effectiveness of set pieces, especially those made in heaven for dramatic sopranos.

Linda revels in verismo, the font of which is the Italian school led by Puccini and others at the end of the 19th century, drawing non-aristocratic themes from the real life such as poor artists the Wild West. With such naturalistic elements to the fore, costume does not necessarily have to be spectacular or even in period to pull up the viewer (who in the gallery automatically has the best seat in the house!) in awe. 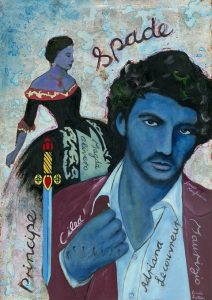 Everywhere are the commanding presence and gestures of the divine divas and handsome heroes, all portrayed with elegance and energy in a framework suffused with quasi-surrealism and which Linda sometimes categorises as operatic “offshoots.” She creates her own settings and costumes, and the eagle-eyed will spot one of her beloved cats making a cameo appearance. It is worth noting that such work has been regularly selected for the Royal Academy summer exhibitions.

The larger canvases are complemented by pencil drawings on Fabriano paper, a quality Italian brand, of the faces of many of the best known stars. The cast includes Angela Gheorghiu, Juan Diego Flores, Kiri Te Kanawa, Luciano Pavarotti, Danielle de Niese, Lucio Gallo, Anna Netrebko, Joyce DiDonato and Jonas Kaufman. There are scenes done in pen and ink on lokta paper, a product hand-made from the lokta or Daphne bush native to Nepal.

Much of the time when she is not in her studio, Linda spends absorbing as many opera performances as she can. 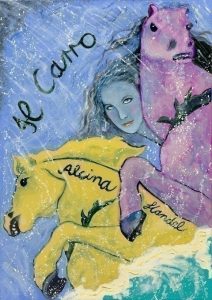 She says: “I see almost everything at the Royal Opera House Covent Garden, and at the Coliseum, plus opera performances in churches, pubs and small halls, together with recitals at Cadogan Hall, Wigmore Hall and wherever opera pops up.”

In the days just ahead of the opening of her exhibition, she enjoyed Norma at the Royal Opera House, and Tosca and Don Giovanni at the Coliseum. One of the aspects which fascinates her is the vulnerability of the singers, especially up there singing without amplification, in front of a highly discerning audience.

In the exhibition it is refreshing to see alongside old favourites some lesser known operas, such as The Cunning Little Vixen (1921, by  Leoš Janáček, about love and death among creatures of the forest) and Alcina (a 1735 opera seria by Handel, in which the sorceress Alcina lures her victims into a grotto of the souls of past lovers). Adriana Lecouvreur  — a rarely-staged opera by Francesco Cilea set in 18th century Paris which tells the complex story of an actress of the Comédie Française – here earns two outstanding representations. 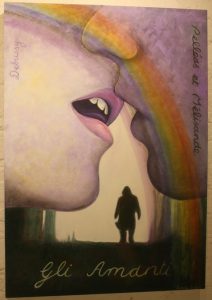 A graceful ‘hang’ at the Chelsea gallery allows full rein to the intensity of colour and drama of the whole series. Like the hapless characters in many a libretto, who will be able to resist the spells cast by these bewitching images?

Separately from this profuse output, Linda has been creating a deck of tarot cards, all with an opera theme.  In that exercise, “I wanted every painting to have an appropriate situation or person in opera, fulfilling the meaning of each tarot card.” The writer Philip Carr-Gomm has accompanied the deck with what Linda says is “a brilliant and erudite” text, for a book entitled The Opera Tarot, to be published in the next few months. 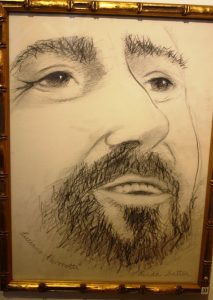