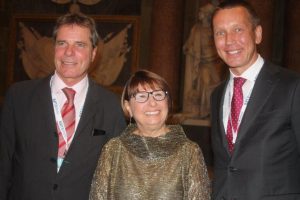 The pioneering role of the medieval republic of Genoa in marine insurance was highlighted when underwriters gathered in the city state’s modern incarnation for the 142nd conference of the International Union of Marine Insurance.

Genoa’s importance throughout the development of the international insurance market was emphasised by contemporary civic leaders and by insurance and shipping executives present at the 2016 IUMI conference.

IUMI president Dieter Berg said that the influence of Genoa, known as La Superba (the proud city) from the time of its prime sea power hundreds of years ago, spread to regions of southern and eastern Europe including the Black Sea. 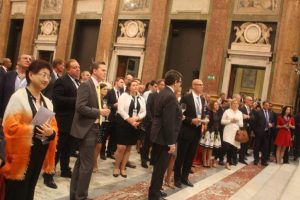 He told guests at a conference welcome evening at the stately Palazzo Ducale that Genoa produced the first documented hull and cargo insurance contracts in 1347, and a few years later, the first reinsurance contract, leading to the development of the first forms of modern insurance practice. “Insurance, my friends from London, took another 140 years before the first contract was issued in London,” said Mr Berg.

There had been fascinating reference to this slice of history in a Gresham College lecture in London in 2014 by Dr Adrian Leonard, a journalist and researcher at the Centre for Financial History at Newnham College, Cambridge,

The earliest solid evidence of marine insurance is to be found in the archives of the city states of Italy – Genoa, Florence and Venice, in the region known as Lombardy, Dr Leonard had said. “Genuine insurance was a product of the late medieval commercial revolution, which occurred in Italy during the half century from 1275 to 1325,” and “in just three weeks between 21 August and 15 September 1393, the Genoese notary Theramus de Majolo was involved in more than 80 insurance transactions… [By this time] multiple underwriters participated in each policy, assuming a proportion of the sum insured.” 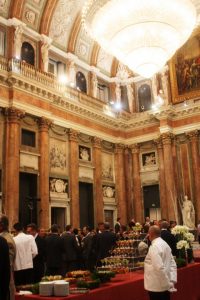 Dr Leonard, who has been described as the world’s leading historian of marine insurance, went on: “It is in the transactions of those Italian merchants – the traders of Lombard Street – where we find the earliest evidence of marine insurance in London.”

Several authorities date the rudimentary origins of marine insurance back to agreements in the 9th century BC between the shipowners of Rhodes and cargo interests to share losses in a scheme that might be considered a forerunner of what is today known as General Average. Later there were “sea loans” to cover property losses, cited in the writings of Demosthenes, an Athenian statesman of the 4th century BC.

Back to the IUMI event of Sept 18 2016: Mr Berg sketched dramatic excerpts from the history of Genoa, which today has 1.5m people living in its metropolitan area. The city went through turbulent times, including the Black Death epidemic of 1348, and the conflict with the rival republic of Venice. The Flemish painter Van Dyck (1599-1641) moved to Genoa as a young man and other great artists who spent time there included Caravaggio and Rubens. 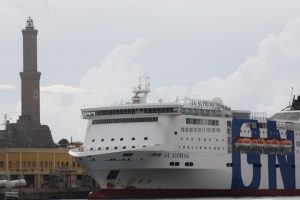 Most of the 620 IUMI participants and 140 accompanying persons were present for the evening in the magnificently-chandeliered Palazzo Ducale. This building was central to the whole epoch of Genoa’s salient status in trade and shipping. The original construction began in 1298, to serve the requirements of the governing Doges as Genoa consolidated its Mediterranean power following naval victories against Pisa and Venice. Its current architectural style dates from the 16th century. The great violinist, Genoa-born Niccolò Paganini (1782-1840) was imprisoned there briefly in 1816, and released on handing over a payment as compensation to a 20-year-old woman he admitted making pregnant. The palace is now a centre for cultural events, exhibitions and receptions. 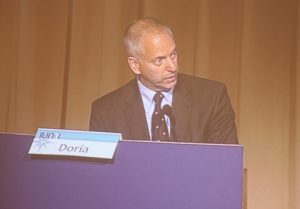 IUMI members and guests enjoyed an enormous spread of Genoese delicacies in the palace’s Salone del Maggior Consiglio (great council hall) and the Sala del Minor Consiglio (minor council hall). These august galleries are on the main floor, known as the Piano Nobile, which are reached by an imposing double staircase. From these frescoed halls, 400 nobles once ruled their maritime empire. The building was damaged by Allied bombing in 1942 and its 38,000 sq m was fully restored in 1992.

Marco Doria, mayor of Genoa, when welcoming the visitors to his city the following day, underlined that “the sea economy is for us really crucial.”  He said that the conference venue, the revamped Magazzini del Cotone (cotton warehouses) once received cargoes of cotton from the US for transformation into textiles. 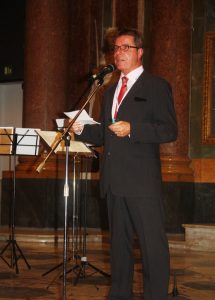 Maria Bianca Farina, president of Associazione Nazionale tra le Imprese Assicuratrici (ANIA), the Italian insurance association which led organisation of the 2016 conference, recalled that this was the second time that Genoa and its Porto Antico (the renovated ancient port) congress centre was hosting IUMI. The previous occasion, in 2001, was a dramatic moment in history, just days after the Twin Towers tragedy when many of the American delegates were unable to make the transatlantic trip because of disruption to flights and general security concerns.

Ms Farina said that in a troubled world, the IUMI maritime community was a very positive example of integration, with people from many countries aiming to grow in their knowledge, experiences, education and networking opportunities. She described Genoa as the most important centre in Italy for insurance and shipping businesses.

The other main social event of the conference was an Italian evening in the converted ship Nave Blu (including a huge tank for dolphins) which followed a walking tour of the Aquarium, Europe’s largest, which occupies a prominent position at the Porto Antico. The crowd viewed seals, sharks, sea horses, coral growths, the baby penguins born at the aquarium in June 2016, and all manner of other sea creatures. 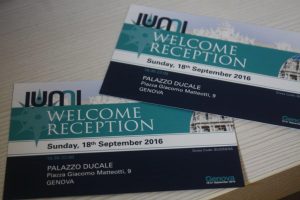 An invitation from IUMI.

During breaks from conference business, the underwriters strolled along the quayside and enjoyed views of several huge cruise ships including the Grandi Navi Veloci (GNV) ship La Suprema of 49,257 gt with accommodation for 2,900 passengers, and the 139,072 gt MSC Preziosa (4,345 passengers), berthed in the port, in addition to more workaday cargo activities.

Although Europe will continue to play a leading role in marine insurance, the delegates recognised, as Mr Berg said, that Asia would dominate trade flows in the next five years. IUMI has asked Mike Davies head of marine and offshore energy business at XL Catlin Singapore to act as its “envoy to Asia” and work with others led by IUMI vice-chair Agnes Choi (chief distribution officer, general insurance, for AXA General Insurance Hong Kong) to foster membership in the region as part of a plan to “grow IUMI’s global footprint.” 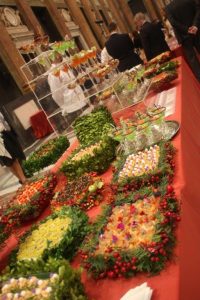 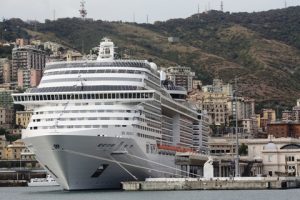