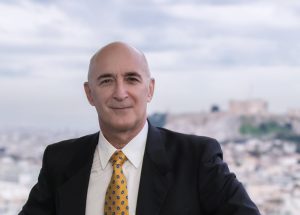 BRUSSELS, 20 October 2016 – The CLIA Europe General Assembly, has voted to appoint Kyriakos Anastassiadis, CEO of Celestyal Cruises, as the next CLIA Europe Chairman.

First appointed to the European Executive Committee of the Cruise Lines International Association three years ago, Anastassiadis takes over the role from Pierfrancesco Vago, Executive Chairman of MSC Cruises, who has been the organisation’s chairman for the last three years. Anastassiadis takes on the crucial role of representing the views of the smaller CLIA Europe Cruise Line Members like Celestyal, as well as all of its other members when he takes up the role on 1 January 2017. The members of CLIA Europe’s General Assembly also unanimously thanked Pierfrancesco Vago for the work he has undertaken over the last three years and asked him to remain on the organisation’s board.

Anastassiadis, CEO of Celestyal Cruises, said: “I feel honoured and humbled by the General Assembly’s decision to trust me as CLIA Europe Chair and I look forward to continuing the work and effectiveness of CLIA Europe in representing all of its Members and ensuring the future success of the cruise industry. We have an effective team of professionals working at CLIA and are developing a stronger presence in Europe. I remain fully committed to matching my peers’ trust with my outmost dedication during the upcoming years.”

Raphael von Heereman, Secretary General of CLIA Europe, said: “I would like to welcome the appointment of Kyriakos and I look forward to working with him. I also thank Pierfrancesco for his restless support and help in expanding our effectiveness in Brussels and other European capitals, in terms of government affairs, communication and business development. As a result, we have notably increased the value that we bring to our Cruise Line Members and Executive Partners.”

About Cruise Lines International Association (CLIA) – One Industry, One Voice

Cruise Lines International Association (CLIA) is the world’s largest cruise industry trade association, providing a unified voice and leading authority of the global cruise community. The association has 15 offices globally with representation in North and South America, Europe, Asia and Australasia. CLIA supports policies and practices that foster a safe, secure, healthy and sustainable cruise ship environment for the more than 23 million passengers who cruise annually and is dedicated to promote the cruise travel experience. Members are comprised of the world’s most prestigious ocean, river and specialty cruise lines; a highly trained and certified travel agent community; and cruise line suppliers and partners, including ports and destinations, ship development, suppliers and business services. The organisation’s mission is to be the unified global organisation that helps its members succeed by advocating, educating and promoting for the common interests of the cruise community. For more information, visit www.cruising.org or follow Cruise Lines International Association on CLIA Facebook and Twitter pages (@CLIAGlobal and @CLIAEurope).

Kerry Anastassiadis, CEO, Celestyal Cruises – Kyriakos (Kerry) Anastassiadis is the CEO of Celestyal Cruises and also a member of the Executive Committee of CLIA (Cruise Lines International Association) Europe. Prior to joining Celestyal Cruises, Kerry distinguished himself as General Manager, CEO and President at renowned corporations such as The Coca-Cola Company, Procter & Gamble, Polaroid and Aujan Industries. With Greek and English being his mother tongues, Mr. Anastassiadis is also fluent in French, Italian and Portuguese. Born in the Democratic Republic of Congo and raised in Southern Africa, Kerry studied Commerce at the University of Witwatersrand and obtained a postgraduate title in Market Research and Advertising.

Maersk, Cargill and 49 others from industry call on International Maritime Organization to set ambitious emissions objective