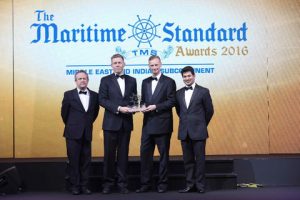 Dubai, 1 November 2016   – Global shipping, logistics and marine services provider GAC Group is celebrating a double success after being honoured at both The Maritime Standard Awards 2016 and the Seatrade Maritime Awards 2016 for the Middle East, Indian Subcontinent and Africa.

GAC was named the Ship Agent of the Year at The Maritime Standard Awards 2016, recognising it as the agency that has made the biggest contribution to the shipping industry in the Middle East and Indian subcontinent. GAC’s achievements were measured across a range of variables including customer service, efficiency, network outreach, new products and services launched, and new business secured.

“This award is testament to GAC’s long-standing presence and strong reputation in the Middle East, something highlighted by our celebrations of our Group’s 60th anniversary this year,” says GAC Group Vice President for the Middle East, Fredrik Nystrom. “But more importantly, it is recognition of the continued efforts and commitment of our people to be much more than ‘just an agency’ in a region where demands are high and competition is fierce.” 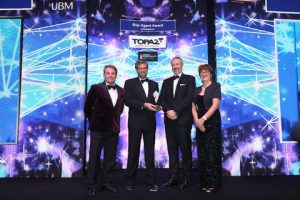 Fredrik Nystrom, Group VP – Middle East, receives the Ship Agent Award at the Seatrade Maritime Awards for the Middle East and Indian Subcontinent, held at the Atlantis The Palm hotel.

The GAC Group’s winning streak continued at the Seatrade Maritime Awards ceremony held last night at the Atlantis The Palm hotel, with the company walking away with the Ship Agent Award for the second consecutive year.

Lars Bergstrom, Group Vice President – Asia Pacific, & Indian Subcontinent welcomed the win saying: “Once again, we found ourselves on the winners’ podium at the Seatrade Maritime Awards, as an industry leader setting new standards in quality and service delivery. It’s something our customers appreciate and our industry peers recognise. We remain committed to facilitating maritime operations through agency, husbandry and logistics services that add value to client operations, as well as innovative solutions to spur global industry growth while reducing environmental impact.”

The GAC Group is participating in the Seatrade Maritime Middle East 2016 Exhibition at Dubai International Convention and Exhibition Centre until tomorrow, 2 November.