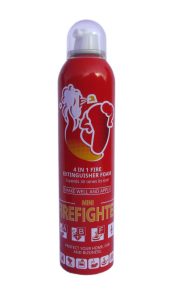 The small hand held fire extinguishers, from the MFF Group based in Essex, is now on sale, less than a week before Bonfire Night.

The small handheld canisters work on most types of fire by smothering it in a dense foam and cutting off the oxygen supply. It does this without using harmful chemicals and without damaging the environment.

David Jones, Sales Director of the MFF Group commented: “Despite huge improvements over recent years, according to the UK’s biggest insurer Aviva, fire remains one of the top reasons for home insurance claims – This ranges from small scale damage to furniture and kitchen appliances, up to much larger house fires.

“Many of these fires and much of the damage could be prevented, or minimised if we just take a few simple steps and follow the advice of local fire brigade. Installing smoke alarms, not leaving candles unattended and having either a fire blanket, or extinguisher in case the worst happens.

“While most houses have smoke alarms, sadly households that are equipped with either a fire blanket, or extinguisher remain a minority. This is why the announcement that Homebase will stock our inexpensive, environmentally friendly and easy to use Mini Firefighters is great news.”

The news that the DIY chain will sell the small canisters comes less than a week before Bonfire Night, which has traditionally been one of the busiest times for fire brigades up and down the country.

But it is not just Bonfire Night when the small extinguishers might come in hand. According to insurance company Ageas, of all the fire claims received by them last year, almost four in ten (38 per cent) started in the kitchen, and nearly a third (31 per cent) started in a cooking pan.

Interestingly the company reported that accidental damage claims for oven and cooker incidents rose by over 15 per cent during the Great British Bake Off season in 2015.[1]

Mr Jones concluded: “It is a sad fact that accidents can happen at any time, but by taking the right precautions and making sure our homes are ready we can minimise their impact.

“Mini Firefighters is one of those things that should be in every house. Its foam contents expand to 30 times its size when fighting a fire, extinguishing flames by suffocating them and cooling the surface to prevent reignition.”

Mini Firefighter is a small 250ml aerosol can that contains extinguishing foam that is used to suffocate fires safely. It is a specialist product used against the four main types of fire: A, B, F and Electrical. It is non-toxic, non-irritant and fully Biodegradable and can be used without training.

MFF are proud to support Team Britannia, the round the world powerboat record attempt skippered by ocean racing legend Alan Priddy. Team Britannia aims to break the current record of 60 days, 23 hour and 49 minutes. It will set off next year from Gibraltar.